An Oasis of Biodiversity

The Delta is recognized as an Important Bird Area by BirdLife International as it is home to 24 species of globally threatened birds. The expedition team has documented 470 bird species, including four new species records for Angola, and collected data for 66 range extensions. Their bird surveys continue to add important data to the regional bird list including a newly discovered breeding population of the vulnerable wattled crane.

Leopards, spotted hyenas, red lechwe, roan antelope, and sitatungas are widespread throughout the Okavango Delta. Some of the world’s most endangered animals like cheetahs and African wild dogs can be found here, as well as stable populations of iconic species such as elephants and lions.

The NGOWP’s camera traps confirmed the presence of the lion, cheetah, leopard, and critically endangered African wild dog in areas as far north as the Cuito and Kembo Rivers’ source lakes. This has led to the expansion of the known range for wild dogs and cheetahs, and the incorporation of this data into the recent National Conservation Action Plan for Cheetah and African Wild Dog in Angola.

Another of the team’s camera traps recorded the first confirmation of sable antelope around the source lake of the Cuanavale River, a location more than 300 kilometers north of their current range. This has sparked new scientific discussion on the relative distribution of this species.

The crown jewel of the Delta is the world’s largest remaining population of elephants, numbering around 130,000, whose movements shape and reshape the Delta’s channels.

The team confirmed the presence of elephants in the upper reaches of the water tower, between the Cuito and Cuando Rivers. This observation indicates that remnants of the great, historic Angolan population still survive and can once again flourish if the area is protected. This could help reduce the ecological pressures that Botswana’s large elephant population is exerting on the environment, which exceeds its carrying capacity, due in part to the Angolan population taking refuge there from poaching and the country’s civil war. Securing a home in Angola for these elephants would allow them to safely migrate back into the Okavango-Zambezi Water Tower.

The team’s comprehensive surveys have resulted in the discovery of 14 plant species potentially new to science and 27 species newly recorded for Angola, filling one of the largest gaps in botanical knowledge on the African continent.

The team also identified previously undocumented, large-scale stratified peat deposits surrounding the source lakes and rivers. These extensive peatlands act like a giant sponge absorbing both carbon dioxide and water, which is essential for sustaining the year-round flow of freshwater into the Okavango, Cuando, Zambezi, and Kwanza Rivers and ensuring that fish and wildlife can endure prolonged periods of drought. 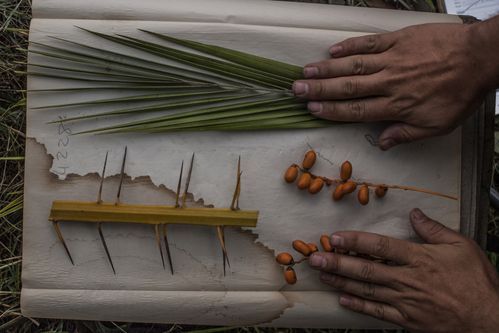 The team’s work to collect and record plant specimens has helped fill the one of the largest botanical knowledge gaps in Africa.

The Okavango River Basin is the main water source for one million people across Botswana, Namibia, and Angola. The Delta is also a major tourist attraction, and provides an important source of income and employment for people living in the communities along the river.

A local woman navigates the Delta on a mokoro, a wooden dugout canoe invented by the Wayei people.

HELP US PROTECT THE OKAVANGO WATERSHED

Our work to explore and protect the amazing biodiversity of the Okavango River Basin is vital to the health of the region. Your support not only helps preserve this important ecosystem, but it also funds the critical work of all of our explorers fighting to save threatened species, protect fragile habitats, and understand the world around us through rigorous research, independent science, and conservation. Your contribution to the National Geographic Society’s work is helping create a more sustainable future for our planet.