FROM THE WATER TOWER TO THE DELTA 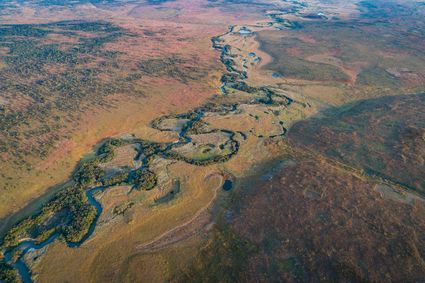 An average of 2.5 trillion gallons of water flow through the Okavango watershed every year, providing water to a million people and creating a haven for wildlife.

Over 95 percent of the water that flows to the Delta originates from rainfall in the Angolan highlands. There it is captured by source lakes and rivers like the Cuito, Cuanavale, Cuiva, Cuando, and Lungue-Bungo, that are surrounded by vast miombo woodlands creating an ecosystem characterized by seepages, streams, oxbow lakes, and ridgelines that make up the Okavango-Zambezi Water Tower. The water tower is critically important for sustaining water flow to the rest of the Okavango watershed.

The seasonal rains travel to the Okavango Delta by two main rivers: the steep Cubango River in the west and the more gradual Cuito River in the east, where water pools into lakes; percolates through grassy floodplains, peat deposits, and underlying sand; and seeps into tributaries.

These rivers converge at the southern border of Angola to form the Okavango River. The Okavango River then flows across Namibia and into Botswana, where it radiates out over the vast Okavango Delta, driving the dramatic seasonal expansion of life in the Delta.

After building up for weeks in the Delta, flood waters eventually burst forth from its southern reaches, forming the Boteti River, which flows out to the Makgadikgadi Pan.

Communities along the water tower have maintained a lifestyle intertwined with the rivers and the ecosystem they support. But as land mines from the decades-long civil war are decommissioned and more roads open up, the outside world is encroaching into these isolated communities and the surrounding wilderness. As a result, the illegal commercial bushmeat trade has picked up, as have unregulated development, charcoal production, and logging.

Widespread, human-set fires from hunting, slash-and-burn agriculture, and charcoal production represent one of the greatest threats to the source waters.

SECURING A FUTURE FOR THE WATERSHED

The Okavango Wilderness Project has been surveying and collecting scientific data on the river system to better understand the threats facing this important ecosystem. Their work is helping form a critical baseline of information to help form solutions to the on-going and emerging threats facing the landscape and wildlife in the Okavango Watershed. Additionally, they have been working with local communities; NGOs; and the governments of Angola, Namibia, and Botswana to secure permanent, sustainable protection for the greater Okavango Basin to ensure its health for the people and biodiversity it supports. 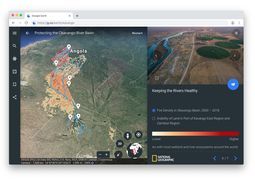 HELP US PROTECT THE OKAVANGO WATERSHED

Our work to explore and protect the amazing biodiversity of the Okavango River Basin is vital to the health of the region. Your support not only helps preserve this important ecosystem, but it also funds the critical work of all of our explorers fighting to save threatened species, protect fragile habitats, and understand the world around us through rigorous research, independent science, and conservation. Your contribution to the National Geographic Society’s work is helping create a more sustainable future for our planet.