Having been down the entire route of the Cuito River the year before, the team headed back to the southeastern Angolan highlands this time to explore the region around the source lakes that feed the Cuito and Cuanavale Rivers. The slow flow from these lakes is what keeps the Okavango Delta alive year-round.

Climbing into local mokoro canoes, they followed the Cuanavale as it ran south, several miles to the east but parallel to the Cuito, to where it meets its sister waters at the town of Cuito Cuanavale, site of a major 1987-88 battle in the South African Border War and Angolan Civil War.

The intensity of the military conflicts throughout this region is not experienced merely in memory. Plant life conceals and softens the rusting hulks of downed helicopters, tanks, and other machines. More insidiously, the ground hides millions of landmines that continue to claim lives and limbs years and even decades after they were deployed. 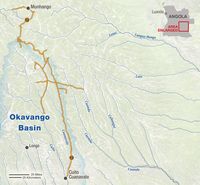 Map by Martin Gamache, Art of the Mappable

To move safely through this scarred landscape requires special knowledge and preparation. The team joined forces with the HALO Trust, an international organization that removes landmines and enables war’s survivors to return to their homes and use their land freely once again. By clearing mines in this particular area, HALO also opened up access for the scientists.

Timing the expedition to the wet season, the team was in place during the peak of species diversity for the region. Using traps and nets they surveyed the populations of small mammals, birds, reptiles, fish, insects, and more, collecting DNA samples for deeper analysis later. Dozens of camera traps were positioned to catch what the team missed in person.

They also set up plots to measure the diversity of the grasslands themselves, and conducted interviews in nine villages to better understand the livelihoods of the human inhabitants of the area.

What explorer doesn’t want to see a legendary beast? The team didn’t encounter a lost dinosaur or river monster on this expedition, but when a village chief told them that the critically endangered African painted wild dogs were plentiful in the region, Chris Boyes felt like he’d heard a myth that just might be true. The next morning when he popped his head out of his tent and saw a small pack across the river feasting on a duiker they had caught, he literally shook with excitement. Their presence here gives even more importance to protecting the area.

The team also confirmed the presence of lions, leopards, and elephants, and identified new species of plants, fish, and invertebrates. A less encouraging observation was the effect of large-scale burning of the forests for agriculture. Without a chance to regrow trees as they would after natural fires, the forests cease to hold and regulate moisture, more flammable grasses and bushes move in, riverbanks erode, and the riverbed rises, disrupting the once self-regulating system.

The greatest discovery of the expedition may have been that the source lake of the Cuito River is surrounded not just by wetlands but by peat, which the team measured to a depth of five meters (16 feet). A dense weave of partially decomposed plant matter allows peat to retain up to 20 times its weight in water, sponging up the heavy falls of the rainy season, and allowing them to trickle out steadily throughout the year. It also forms a natural filter, helping to explain the river’s exceptional clarity and purity—something the team looks forward to enjoying with every new expedition.

With a camera in every pocket and solar cells for recharging, the team shared their animal sightings, stunning sunsets, and thoughts and reflections in real time throughout the expedition. See it all in their Instagram feed.