The Republic of Palau, a tropical archipelago in the western Pacific, is renowned for its matchless island scenery, pristine dive sites, and world-famous natural features, including the forest-tufted Rock Islands and surreal Jellyfish Lake.

While 70 percent of Palau’s population lives on the main island of Koror, the entire nation consists of more than 300 islands, many of them entirely uninhabited. Given this unique geography, Palauans have traditionally worked to maintain a balance with the sea. The local custom of bul, for instance—practiced for generations—temporarily closes certain areas to fishing in order to allow marine life to recover.

After World War II, population growth and the intensification of fishing using modern technology began to take a toll on the undersea life of the area, and it became increasingly critical to take steps toward preserving Palau’s waters for generations to come. Aware of the country’s past and concerned about its future, in 2009 then President Johnson Toribiong declared the first shark sanctuary in the world. 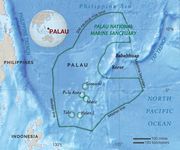 In September 2013, current President Tommy Remengesau, Jr.—recognizing the advantages of a pristine environment in a tourism-based economy, as well as the value of restoring and preserving the culture’s ancient balance—announced his intention to protect 80 percent of Palau’s waters as a national marine sanctuary.

The following year, in September 2014, the Pristine Seas expedition team traveled to Palau to estimate the diversity and abundance of marine life that would be protected by the offshore sanctuary and to test how well existing inshore protected areas had performed up to that time.

Working in collaboration with the Palau International Coral Reef Center, the team produced scientific assessments showing that marine protected areas (MPAs) helped to maintain the rich biodiversity for which Palau is known. Among their findings: Total fish biomass was two times larger in MPAs than in nearby unprotected areas, and biomass of top predators was five times higher.

The team’s deep-sea explorations revealed abundant fauna, including manta rays, lantern sharks, the endemic Palau nautilus, and even a tiger shark found at a depth of 515 meters.

Creating this sanctuary is a bold move that the people of Palau recognize as essential to our survival.

On October 22, 2015, Palau’s congress passed legislation to protect 80 percent of the country’s waters—the largest percentage of protected marine territory of any nation in the world.

The remaining 20 percent of Palau’s exclusive economic zone is designated for fishing by the local community. The Pristine Seas team remains actively involved in the scientific monitoring of the sanctuary.

A downed Japanese seaplane is absorbed by the living reef. A gentle “alien” emerges from the deep. Unlike Dory, this forgetful fish is the size of a car windshield. In the German Channel, a giant bait ball forms and explodes. Jellyfish Lake delivers. An over-under photo shows the calm below the storm.

Scientific Report
Marine Biodiversity and Protected Areas in Palau: Scientific report to the government of the Republic of Palau
May 01, 2015