The Okavango Wilderness Project’s 2018 expedition focused on the eastern-most section of their survey area in Angola. The ambitious trek took the team down the length of the Cuando River, a journey that will allow them to explore the intersection of the Okavango and Zambezi Basins, two of the largest in southern Africa.

Much of the 2018 expedition covered uncharted territory among the vast marshy floodplains and endless channels of southeastern Angola.

This expedition marks the culmination of a four-year endeavor to explore the vast wilderness surrounding the source lakes of the Angolan highlands and trace the water that feeds the Okavango Delta from its source. The team’s previous treks explored the two other major river systems that feed the Okavango Delta: the Cuito and the Cubango Rivers. On the 2018 expedition the Okavango Wilderness Project ventured into the heart of the region and trekked through the remote reaches of the Basin in search of evidence of Africa’s most iconic wildlife.

The team began at the origin of the river in the Angolan highlands, setting up camera traps and conducting surveys to document the biodiversity in the area before setting off down the Cuando River. Two teams launched separately at two of the river’s tributaries before reuniting at the confluence of the rivers. As they made their way south in their mokoros, or traditional canoes, the team continuously gathered data on wildlife and water quality to better understand the impact of human activity in the region and inform the development of policies to protect this important landscape.

Latest From the Team 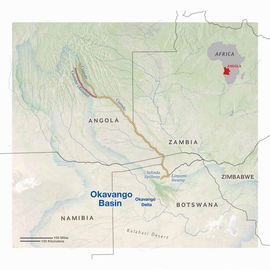