This lists the logos of programs or partners of NG Education which have provided or contributed the content on this page. Program

Activity 1: Kennedy in Castro’s Eyes: The Impact of the Bay of Pigs Invasion on Fidel Castro 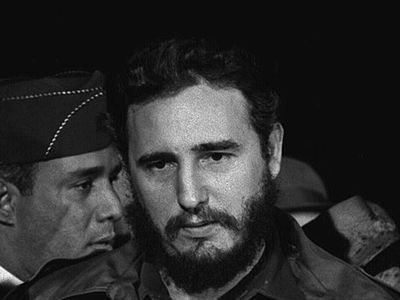 Students analyze the impact of the Bay of Pigs invasion on the mindset of Cuban leader Fidel Castro.

1. Introduce information about the Bay of Pigs invasion.
Divide students into pairs or small groups and ensure that each group has computer access. Direct students to the JFK Library: Bay of Pigs website. Ask students to read the information on the page and take notes by filling out the Five Ws Chart.

Have two students read the Bay of Pigs Scene excerpted from the Killing Kennedy script. Assign one student to play the role of John F. Kennedy and another to play the role of Jackie Kennedy. Before the two volunteers read the selection, instruct students to write down adjectives that would describe President Kennedy’s behavior in the scene as they listen.

Have the two student volunteers read the dialogue aloud for the class. After reading, bring the class together for a whole class discussion. Ask:

3. Discuss the Bay of Pigs Invasion.

Write the following four questions on poster paper or the whiteboard for students to see.

Ask students to use what they learned from reading the Bay of Pigs Invasion handout to respond independently to the questions written on the poster paper or whiteboard. Give students approximately 10 minutes to complete their responses in their notebooks.

Have students form pairs to discuss their responses to the questions. Then, bring the class together and ask each pair to summarize one main point from their discussion. Clear up any misconceptions before moving on.

4. Use primary sources to analyze the impact of the Bay of Pigs invasion on Castro.

After students have had enough time to read Castro’s speech and complete the sections of the SOAPSTone worksheet, lead students in a discussion about the speech. Ask:

5. Write a letter as Fidel Castro to Nikita Khrushchev.

Tell students the following: The Bay of Pigs invasion had a major impact on the way Castro viewed the United States. Castro, believing that American leaders would soon attempt another attack against him, sought out support from the other global power of the day, the Soviet Union. Now, you will put yourself in Castro’s shoes and imitate his letter to Soviet leader Nikita Khrushchev.

Explain to students that they will write a letter from Castro’s first-person perspective, appealing to the Soviet Union. Distribute the Write a Letter to Khrushchev worksheet, read aloud the directions, and distribute and review the Write a Letter to Khrushchev Rubric so students understand the expectations of this exercise. Have students read and review the Bay of Pigs Invasion and the Fidel Castro Speech handouts before writing their letters. Ask students to use SOAPSTone as a pre-writing strategy and to refer to their earlier SOAPSTone work if they need guidance.

After students hand in their letters, lead them in a discussion about their experiences in this activity. Answer questions students may still have about the Bay of Pigs invasion, Fidel Castro’s reactions to the invasion, and the relationship between Castro and the Soviet Union/Khrushchev.

Review students’ letters using the Write a Letter to Khrushchev Rubric. Excellent letters will describe Castro’s attitude after the Bay of Pigs invasion and propose a potential relationship between Cuba and the Soviet Union. Check all letters for specificity and clear explanations of reasoning.

Ask students: Was Kennedy an effective leader at the Bay of Pigs invasion? Why or why not? Discuss responses as a class and tell students they will have another opportunity to evaluate Kennedy’s leadership in the next activity on the Cuban Missile Crisis. 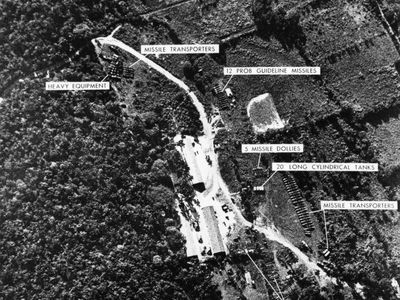 1. Read an excerpt from the Killing Kennedy script.

Assign students to play the different roles in the Cuban Missile Crisis Scene selection from the Killing Kennedy script. Have students act out the scene. Before reading, ask the remaining students to listen to identify what problem President Kennedy faces in this scene. After, ask:  What problem did President Kennedy face in this clip? Explain to students that this problem has come to be known as the Cuban Missile Crisis. It occurred in 1962. For thirteen days, the world teetered on the brink of nuclear war. Ask: Why did missiles in Cuba pose a threat to the United States?

2. Review Kennedy’s policy options in the face of the Cuban Missile Crisis.

Explain to students that they will be acting as Kennedy’s advisers during this thirteen-day period. They will need to research and analyze the documents that Kennedy’s real advisers had available to them, and then present their findings to the president (you).

Tell students that President Kennedy had several options in responding to the threat posed by the placement of missiles on Cuban soil. Ask students what options they think Kennedy had. List student responses on poster paper or on a whiteboard. Use the discussion to prompt students to include all of the options listed below. You may wish to project the list for students to read.

Explain to students that after the failure of Bay of Pigs invasion, Kennedy encouraged dissent among his advisers. If an idea was bad, Kennedy wanted his advisers to tell him; he did not want “yes men” to help him make decisions. Explain to students that during the Bay of Pigs invasion, members of Kennedy’s staff who disagreed with the action refused to voice their negative opinions, not wanting to criticize the larger group. After this failure, Kennedy altered his leadership style, wanting to explore all options before making a decision.

Tell students they will now be role-playing as national security advisers to President Kennedy, a group known during the Cuban Missile Crisis as EXCOMM. Each student group will be assigned one policy option brainstormed earlier and will be responsible for:

4. Acting as EXCOMM, students present their policy arguments and the class comes to consensus on one response.

After groups finish drafting their pros and cons with visual aids on poster paper, have each group present their policy and its accompanying pros and cons. After each group presents, students may ask questions about the group’s policy and thinking. Have the whole class summarize the presentation by determining the most significant pro and con for the policy. Ask students to support all statements with evidence taken from the Confidential Files.

After all groups have presented, have students discuss all the options that were presented.

Play the Red Threat video clip to the class. After watching, ask:

6. Examine the outcomes of the Cuban Missile Crisis.

Explain to students the following outcomes of the Cuban Missile Crisis. Project these points in a PowerPoint presentation or write them on a piece of poster paper.

Close the activity with a discussion of the questions below. Ask:

Have students respond to the following questions, supporting their responses with evidence from the activity. To what extent was Kennedy a successful leader in this crisis? Why was Kennedy more successful in the Cuban Missile Crisis than he was during the Bay of Pigs invasion? In what ways?

Have students research the politics of détente and the period of relaxed tensions between the United States and the Soviet Union following the Cuban Missile Crisis.

Distribute the Kennedy and Cuba Leadership Assessment worksheet. Ask students to complete the graphic organizer to generate a thesis, and then respond to the summative question in a well-written essay, supporting their response with evidence learned in class. Collect the response and assess student work on the provided rubric.

For this activity, it would be useful to have desks or tables arranged to facilitate students working in small groups.

Throughout the first half of the twentieth century, Cuba–located ninety miles off the coast of Florida–was extremely important for large U.S. corporations. According to a Department of Commerce survey released in 1956, American firms controlled 90 percent of Cuba’s telephone and electric services, 50 percent of Cuba’s public railways, and 40 percent of Cuba’s raw sugar production. As a result, the United States government actively supported the pro-American dictator Fulgencio Batista, a brutal authoritarian ruler who thrived in opulence as poverty decimated most Cuban people.

In this climate of oppression, the Cuban people rallied to an enigmatic guerrilla fighter, Fidel Castro, who toppled Batista’s government and eventually promised to bring socialism to Cuba. Unhappy with this outcome, the CIA, under authorization from President Eisenhower, developed plans to overthrow Castro. President Kennedy, less than three months after his inauguration, authorized the plan. This plot became the failed Bay of Pigs invasion, in which American-backed Cuban exiles failed to start a popular uprising against Castro.

After the failured Bay of Pigs invasion, Kennedy encouraged dissent among his advisers. If an idea was bad, Kennedy wanted his advisers to tell him; he did not want “yes men” to help him make decisions. Explain to students that during the Bay of Pigs invasion, members of Kennedy’s staff who disagreed with the action refused to voice their negative opinions, not wanting to criticize the larger group. After this failure, Kennedy altered his leadership style, wanting to explore all options before making a decision.

Following the Bay of Pigs invasion in 1961, Fidel Castro, the communist leader of Cuba, became convinced that at some point the United States would attempt to remove him from power. As a result, he grew increasingly defiant of American policymakers and courted the leaders of the Soviet Union to bolster the strength of his small island country. In 1962, Soviet Premier Nikita Khrushchev offered to place Soviet nuclear missiles on Cuba just ninety miles off the coast off Florida. Castro eagerly accepted Khrushchev’s offer, believing nuclear missiles in Cuba would deter American aggression and secure Cuba’s safety.

An American spy plane eventually discovered the existence of missiles sites off the coast of Cuba, sparking what would come to be known as the Cuban Missile Crisis. President John F. Kennedy demanded that all nuclear missiles be removed from Cuba and blockaded the island to prevent further deliveries of nuclear warheads. During the thirteen-day standoff between the United States and the Soviet Union, the world teetered on the brink of nuclear war. Eventually, Soviet Premier Khrushchev acquiesced to Kennedy’s demands, agreeing to remove the missiles from Cuba publically if the United States military would promise not to invade Cuba and secretly remove missiles from Turkey, averting potential disaster and ending the Cuban Missile Crisis.

type of economy where all property, including land, factories and companies, is held by the government.

system of organization or government where the people decide policies or elect representatives to do so.

person with complete control of a government.

forced ejection from a country, or a person who feels forced to leave.

having to do with warfare conducted by organized groups of civilians, not soldiers or the military.

overthrow or total change of government.

system of organization or government where all property, industry, and capital is owned by the community, not individuals.

(1922-1991) large northern Eurasian nation that had a communist government. Also called the Union of Soviet Socialist Republics, or the USSR.

Instead of discussing summary questions, formally assess students by asking them to respond in writing to the final discussion questions.

In Step 2, if students brainstorm other feasible options, you may choose to incorporate them into the activity at your discretion.

This activity is extremely student-centered, involving small group work and student-led discussion. For more information on establishing procedures for these types of activities in your classroom, please refer to the Other Notes in the Preparation section.