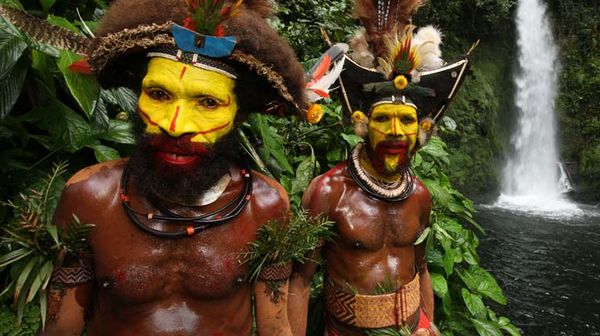 The island nation of Papua New Guinea represents the greatest single concentration of linguistic diversity on Earth, with 830 listed languages identified thus far. In 2009, the Enduring Voices team recorded interviews with speakers of 11 of these indigenous languages. These languages represent nearly the full spectrum of endangerment processes found in Papua New Guinea and embody the various forces that drive language threat, endangerment, and language shift.


The island nation of Papua New Guinea [PNG] represents the greatest single concentration of linguistic diversity on earth, with 830 listed languages identified thus far, and an unknown number remaining to be scientifically documented. Part of PNG also falls within a language hotspot. Without PNG, no survey of the world’s languages or understanding of the current global process of language extinction would be complete. The Enduring Voices team visited PNG with three goals:

(1) to assess the current state of vitality and endangerment of selected languages through interviews, observation and digital recordings,

(2) to meet with local language activists and scholars to discuss ways we can support language revitalization, and

(3) to raise awareness of the linguistic diversity of PNG by making available to the public new materials, for example, photographs, audio and video recordings, and data on current numbers and locations of speakers.

During a three-week trip, the Enduring Voices team recorded interviews with speakers of eleven indigenous languages of Papua New Guinea. These languages, along with Tok Pisin, the national lingua franca which is replacing many of the smaller languages, represent nearly the full spectrum of endangerment processes found in Papua New Guinea and embody the various forces that drive language threat, endangerment and language shift. The eleven languages range from being severely endangered to healthy in status, but all are likely to face increased pressure in the future. The languages belong to ten different language families (and represent four different macro-level genetic units).

In Southern Highlands Province we made recordings of five languages. Huli is one of the largest languages in the country with over ninety thousand speakers and the locally dominant tongue in the western part of Southern Highlands Province. It nevertheless remains at risk due to Tok Pisin and English, both associated with increased literacy and rising educational levels among the population. We recorded other smaller languages of the regional market centre, Tari, all of which face a dual risk from the twin forces of education and Huli linguistic expansion. We recorded samples of these so-called 'brother' languages (as the Huli call them) including Duna, Ipili and Etoro, which are not closely related linguistically to Huli, during our stay in Tari. In addition, we also interviewed a speaker of the tiny Foi (Foe) language who said his children speak only Pidgin (Tok Pisin) and Huli, not their ancestral tongue. These small languages face a threat from the increasing dominance of Tok Pisin and English coming from media and education, and the local dominance of Huli in the Tari region which seriously threatens their prospects for enduring long-term.

The second leg of our expedition took us to East Sepik Province, where we encountered several small endangered language communities. These local Karawari region languages lack teaching materials and books, and many people blame this for the rising dominance of Pidgin . In many villages, there is only passive knowledge of the ancestral Pondo-family languages Yokoim and Karim , while in others, not even passive knowledge of the heritage tongue among schoolchildren is found. It may be too late for the Karim language to rebound, but the Yokoim language can still be maintained in some of the communities with adequate revitalization efforts. In Konmei village, Yokoim is still used by children, while in Ambonwari village (and its various satellite villages) a local variety of Yokoim thrives. This local Ambonwari village variety appears to be a closely related dialect of the Yokoim language based on strictly linguistic criteria. Interestingly, the speakers of Yokoim proper do not recognize the Ambonwari speakers as being the same tribally: They call the Ambonwari speakers the Sungat tribe and their language by the same name. More curiously, they do not consider their upriver cousins to be linguistically comprehensible even ("only a few old people can understand them"), though the Ambonwari people state that they readily comprehend the downriver Yokoim language, and insist that it is the same language. This shows how language and sociolinguistic identity do not always neatly align.


Further upstream, in Wambrumas village, we recorded the Wamut language, which appears to be an undescribed Arafundi tongue that is less
endangered than neighboring Yokoim.

Our final stop was Madang Province, where we investigated several of the more than 100 very small and densely compacted language communities found in the province. We recorded three, including Panau, a language spoken only in Matugar village and one satellite village. The Panau language belongs to the Bel Vitiaz family of the Oceanic stock of the far-flung Austronesian phylum (a diverse set of languages including distant cousins Hawaiian, Tagalog, Indonesian and Malagasy). Panau (which means “give me”) has fewer than 500 speakers and
the community is very eager to begin language revitalization, documentation and maintenance efforts.

We also recorded the similarly sized Panim language, belonging to the Gum Mabuso family and found in just Panim village alone. The Wagi Ne
language of Kamba village is a Hanseman Mabuso language that has a reported (probably inflated) population of over 3,300 speakers and semi-speakers. However, the youngest generation seem to not understand the language and even elders favor the use of Pidgin for most daily communicative functions in the village, by their own admission and observed practice. The long-term survival of Wagi Ne in Kamba village appears unlikely.

In summary, we recorded a common list of roughly 200 basic words and a minimum of 25-50 basic phrases and sentences in each of the following languages.

Materials from the languages will be selectively added to the Enduring Voices website as well as to the Living Tongues website. Medium- and moderately-sized samples include more words and sentences and short texts.

We have identified two communities where we plan to assist in language revitalization efforts.

1. Yokoim—Nick Waikay (Konmei village Councilor) and Felix Andi (Kundiman Community Leader) individually and separately requested assistance in making learning materials, dictionary and grammatical materials for teaching Yokoim language throughout primary and secondary schools in area. Such materials would be suitable for immediate use in Manjamai village and in Ambonwari village. We have recruited a graduate student who is willing to work in these communities for an extended period in 2010-11.
2. Matugar—The community expressed a wish to collaborate in acquiring language technology, including internet-based tools, as they live near a coastal road and will have internet in the near future. This would be an ideal location to send a team of graduate students to work on a short-term basis (6-8 weeks) for a talking dictionary project.

Download the pdf version of the Papua New Guinea Expedition.