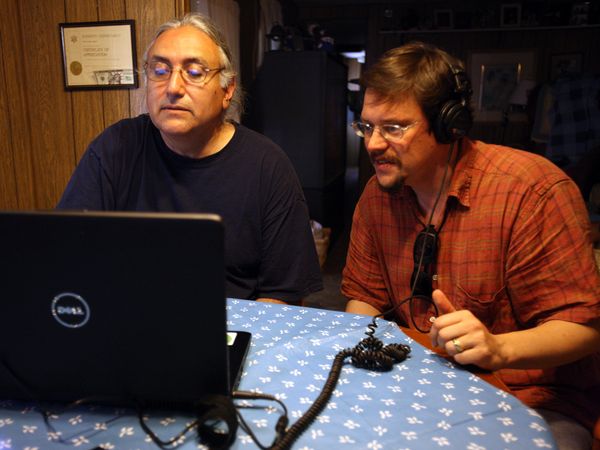 In June 2009, the Enduring Voices team traveled to northern California to meet with the Winnemem Wintu people. Their language is moribund, but a grassroots revitalization effort has been active off and on for the last two decades. Many of the issues that the Winnemem Wintu must address are common obstacles that indigenous Native North American communities face in their revitalization efforts and in social struggles.

An Enduring Voices team visited with the Winnemem Wintu people who reside outside of the city of Redding, California, near Mount Shasta in the northern part of the state. Their language is moribund but a grassroots revitalization effort has been active off and on over the past two decades. Many of the issues that the Winnemem Wintu must address are common obstacles that indigenous Native North American communities face in their revitalization efforts and in social struggles.

The Winnemem Wintu, despite nearly two hundred years of historical records documenting their culture, are not federally recognized as a tribe in the US today. The Winnemem Wintu remain proud of their cultural and linguistic identity despite this lack of official status, even though this means that they cannot get protection for their sacred and ritual sites which are frequently subject to vandalism and/or corporate destruction and industrial contamination. To make matters worse, a house fire in 2008 destroyed a large portion of the materials
they produced for their language revitalization efforts.

In the fall of 2008 the leaders of the Winnemem Wintu community, Mark Franco and Caleen Sisk-Franco, contacted Living Tongues Institute Director Dr. Greg Anderson. A preliminary visit to the community was made in December 2008 during which assistance from the Enduring Voices project to aid their language revitalization efforts was proposed, including setting up the recent visit.

During our June visit, Enduring Voices team members Greg Anderson and Chris Rainier, along with student assistant and technical associate Sam Anderson, delivered a Language Technology Kit to the Winnemem Wintu language program and began preliminary training in the use of this equipment to assist in renewing their language revitalization efforts. The computer, digital video camera, digital audio recorder and digital still camera were very well received and put to immediate use. In addition, Dr. Anderson delivered a large binder filled with legacy materials on the Winnemem Wintu language, including some of the materials that were lost in the fire, and agreed to send a second such binder with materials still being collected. This gesture had a very positive effect on the community leaders, who welcomed the Enduring Voices team
warmly.

Representatives from the Winnemem Wintu language revitalization program have agreed to take part in the training seminar to be held next April in Santa Fe and are eager to network with communities facing similar issues globally. In addition to developing their own materials with the assistance of the Language Technology Kit, the Winnemem Wintu anticipate a long and mutually enriching relationship with the Enduring Voices team.

Contact Dr. David Harrison with any questions or comments at harrison@swarthmore.edu .

Download the pdf version of the Northern California Expedition.