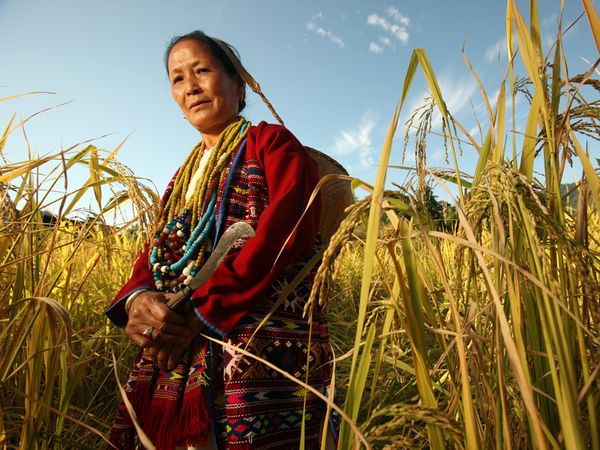 During a return visit to India's Arunachal Pradesh state, a remote mountain enclave restricted to outsiders, the Enduring Voices team focused its attention on members of the Aka group—a perfect case study of a small language currently existing in a fragile equilibrium yet already showing signs of possible endangerment that could lead to eventual extinction.

The Enduring Voices team made a second visit to the West Kameng District of India’s Arunachal Pradesh state, a remote mountain enclave restricted to outsiders. Expedition team members included linguists Greg Anderson, David Harrison, and Ganesh Murmu, and National Geographic fellow and photographer Chris Rainier. Writer Russ Rymer also accompanied the team. We explored the rich mosaic of traditional cultures and languages, many of which have not previously been recorded, photographed, or scientifically documented.

This was our second visit to the same location; we previously visited it in March 2008. The two expeditions allowed us the opportunity to document previously unrecorded languages. Our second visit also allowed us to cultivate good relationships within the community. Members of the Aka group, in particular, were pleased to receive prints of photographs taken by Chris Rainier in March 2008, and to view and listen to high-quality recordings we made on our previous trip.

We focused our attention on Aka (also called Hruso)—with a total number of speakers estimated under 2,000—as a perfect case study of a small language currently existing in a fragile equilibrium yet already showing signs of possible endangerment that could lead to eventual extinction.

Aka is already in decline among some segments of the community and is being abandoned by some in favor of Hindi. But we observed other members of the community—language activists—making strategic efforts to widen the use of the language and thus prevent its decline. We witnessed creative uses such as the performance of songs (including in the hip-hop genre, performed by Sange Nimasow, age 20), and the telling of traditional stories and sayings by elder members of the community (Nyetom Nimasow, age 60). Efforts such as theirs will help determine the future of Aka, which has little socio-economic value outside the half dozen remote villages where it is spoken.

Aka has much to teach science: For example, it has a phenomenally complex sound system that is not typical for languages of the region. We were also able to obtain a thorough photographic documentation of the culture—including traditional activities such as barley harvesting, house-building, hunting, musical performance, and traditional cultural celebrations.

All four members of the Enduring Voices team worked to collect and record several thousand words and sentences from a total of six languages, including Aka, Miji, Sulung, Sherdukpen, and Monpa. In some cases this will be the first recordings and photographic documentation of these languages and cultures ever to be made publicly available.

We also delivered our second (in 2008) “language technology kit” to the Linguistics Department of Guahati University. We conducted a training session there with students and faculty who are working to record local languages.