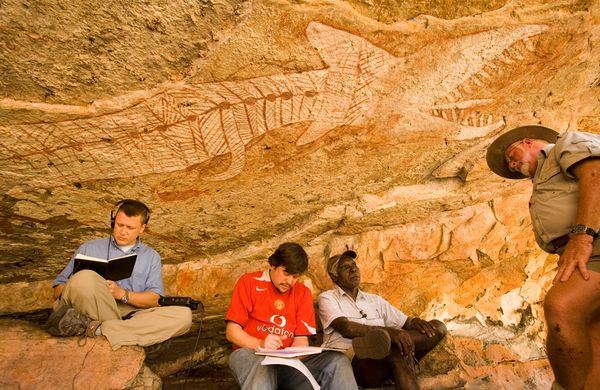 Aboriginal Australian cultures are among the world's most ancient, dating back at least 50,000 years. Now, about a hundred of the continent's indigenous languages are in danger of extinction. An Enduring Voices team recently went to Australia to hear from dozens of local experts about the current state of Aboriginal culture and language. The data they gathered will be used to raise global awareness of and interest in language endangerment.

Aboriginal Australian cultures are among the world's most ancient, dating back at least 50,000 years, long before humans inhabited Europe or the Americas. Their unique languages and traditions are primarily oral, not written down or recorded, and in many cases they are still relatively poorly documented by scientists. At least a hundred indigenous languages of Australia are now in danger of extinction. The elders (and youngsters!) we met generously shared with us some of their vast knowledge about language, mythology, plants, animals, climate, and human adaptation to a harsh environment. It was a rare privilege to have a glimpse into these amazingly complex and ancient cultures, as well as their efforts to ensure continuity of the tradition.

The main goal of the Enduring Voices Australia expedition was to observe the current state of language endangerment and revitalization in several remote communities and to record audio/video interviews with elders and other local experts.

We began our trip by visiting the Batchelor Institute of Indigenous Tertiary Education, a leading center for Aboriginal language revitalization efforts near Darwin, Northern Territory. We were privileged to interview specialists Jeannie Bell, who works on Frazier Island languages; Nazareth Alfred, of the Masi Island Kolpa tribe, who studies the Kulkalgowya language; Lynette Cockatoo, who is working to retrieve the traditional Nigarakudi language; William Brady, a speaker of Yalangi and expert hunter; and Leonora Adidi, a speaker and activist for her native Kalawkawawya tongue (also called "KKY"). Each of these dedicated researchers expressed their desire and aspiration to help revitalize and document their language. We also interviewed four members of Batchelor's dynamic book publishing team, which produces beautifully designed, high-quality storybooks in many Aboriginal languages.

At Nauiyu Nambiyu, we met linguist Patricia McTaggert, a speaker and expert on the Nangikurrunggurr language. She reported that she has just completed a dictionary coauthored with linguist Nick Reed after many years of work. Nankikurrungkurr may be literally interpreted as "language of the swamp people." Another language Patricia speaks, Ngengiwumerri, means "language of the sun and cloud people."

We were welcomed into the Nauiyu Nambiyu community by elders Molly Yawalminy and Kitty Kamarrama, who took us to a nearby river, anointed us with river water, and ceremonially announced our presence so the local spirits would not harm us. The ceremony, which they allowed us to film, included song and was performed in the Nangikurrunggurr language. The elders then sat down with us for an extended conversation that included a discussion of traditional ecological knowledge that links "calendar plants" to food-gathering activities. When the bark peels easily from the gum tree, for example, sharks in the river are fat and may be hunted. When the kapok tree blooms, say the elders, it is time to gather crocodile eggs.

One severely endangered language that we encountered was Magati Ke (or Marti Ke), spoken in the Wadeye community of the Northern Territory. Magati Ke is now reported by the community to be down to three elderly speakers. Accompanied by local linguists Maree Klesch and Mark Crocombe of the Wadeye Endangered Language project team, who have been working with this community for years with great results, we met with and spoke to three Magati Ke speakers, including "Old" Patrick Nunudjul, who told us a "teeth dreaming" story, which the Wadeye project team told us they had not previously recorded. We also heard dreaming and rock art stories (e.g., "the headless man") told by Cyril Ninnal and Theodora Nandu and others in the Murrinh Patha language, which is spoken locally but not endangered.

Another language we recorded bits of—upon meeting the last reported speaker— is Amurdag (Amarag, Amurdak), which had been reported in some of the scientific literature as extinct 25 years ago. In fact it was not extinct, and Australian linguists Robert Handelsmann, Nick Evans, Bruce Birch, and others had been with working with speaker Charlie Mangulda and another remaining speaker over the years. Charlie, locally considered to be a "last speaker," told us he had not used the language regularly in some years and remembered words with difficulty.

At the Garma Festival, we witnessed the vibrant present and future of cultural revitalization in song, dance, story, and visual arts. We were formally "adopted" by Oscar Marawali, from the Laynhapuy homeland, and fellow members of his rock band, known as Karangali (meaning "crocodile" in the Yolngu tongue). We also interviewed and saw performances by Yothu Yindi and interviewed drummer and music impresario Ben Hakalitz of the Melanesian Funk band Tribe of Jubal. We accompanied and observed a young aboriginal film crew—funded by a grant from the Genographic Legacy Fund—as they recorded a documentary about Yolngu cultural survival. Trish Pascuzzo of Tourism Australia accompanied and expertly assisted us at Garma Festival and oversaw our entire itinerary, travel, permits, and journalistic credentials.

In Broome, Western Australia, we spent most of three days walking through traditional lands with Rubibi elder and expert guide Neil McKenzie. We filmed Neil as he demonstrated well digging, medicinal plant use, way-finding skills, hunting and tracking techniques, weather prediction, and many more traditional Yawuru cultural survival skills. We were impressed by Neil's breadth of knowledge and strong sense of cultural groundedness. He was not, however, very optimistic about the future of his own Yawuru culture, and he described how it is now threatened by indifference and outside influences. He emphasized the importance of the landscape to language, saying: "If I don't show you these things [e.g., landscapes], you won't understand the language. It exists because of the land. It is in close harmony with it."

In Broome, we observed the wonderful efforts of the Yawuru language community, now reportedly down to about three fluent speakers and perhaps a dozen speakers of other levels of fluency, to revitalize their language. A Yawuru elder, Doris Edgar, allowed us to observe and film a Yawuru language lesson she conducts for students at Cable Beach Primary School. It was truly inspiring to see the children understanding and speaking what they referred to as a "dying language" and expressing so cogently their strong desire to help it survive. We also interviewed Yawuru elders Susan Edgar, her mother, Elsie Edgar, and Thelma Sadler, who was 97 when we met her and may be the
oldest living speaker of Yawuru.

In a surprise, unplanned encounter on our last day in Broome, we were taken by our guide, Neil McKenzie, to meet his "auntie," Patricia Ahchoo, an elder from Sunday Island who said she spoke a variation of the Bardi language and had formerly taught it in a local primary school. Patricia also told us she was among the last speakers of the Djawi (Jawi) language, and the team conducted a brief interview with her. We also interviewed Joyce Hudson, a Walmajarri language expert who helped us understand the complex map of languages in the region and told us a bit about the local vernaculars, "Broome Talk" and "Kimberly Kriol."

A highlight of our visit to Broome was two visits with talented Walmajarri musician and painter Clifton Bieundurry, lead singer for Groovy Lips and the Yang, a group featuring didgeridoo, guitar, and song. Clifton expresses the dreamtime past and envisioned future of his people in song and painting. He is widely recognized as a leading figure of the young Walmajarri generation, and his artwork has been exhibited around the world. We filmed an interview and performance by Clifton at the Old Broome Lockup Gallery.

TEABBA Radio runs an impressive and polyglot program of broadcasts that covers much of the Northern Territory and brings the airwaves to life with the sounds of multiple languages. At TEABBA, we interviewed court translator and Anindilyakwa language activist Nancy Lalara from Groote Island, who cheerfully asserted, "Our language is the hardest language." At Skinnyfish Music in Darwin, we interviewed label co-founder Michael Hohnen about the current state of Aboriginal popular music. Skinnyfish is a leading promoter and talent spotter for dynamic young performers like Saltwater Band. Michael eloquently noted: "What's ancient in Australia is not in the seeing, but in the hearing." Skinnyfish Music is doing an excellent job of connecting ancient musical traditions to modern media technology. At Goolari Radio, an Aboriginal-run media company in Broome, we met Bard speaker and entertainer Bamba Banial, who told us some pearling legends of Broome. He stated that "TV is becoming a survival kit for our languages. ... We want to 'edutain.'" Also at Goolari, Stephen Albert, chair of the Broome Indigenous Music Association, remarked that "media is critical to the self-identity of the indigenous people." At Kimberly Interpreting Services, we learned about the challenges of maintaining multilingualism and supporting indigenous languages in business and education.

Our colleague and Enduring Voices project director at National Geographic, Chris Rainier, is a world-renowned photographer, expert videographer, and the driving force behind much of this expedition. Chris is both a visual anthropologist and a conservation photographer. Far from assigning a passive, portraying role to photography, Chris believes that it has the power to shape fundamentally how people think about global problems like language endangerment. Chris produced many powerful still images and video recordings during this expedition, which, when released in the future, will influence both perception and action relating to language endangerment and revitalization. We were grateful to be working with such a committed and talented artist on this (and future) expeditions. Chris's photograph of Greg Anderson and David
Harrison interviewing Charlie Mangulda at the rainbow serpent cave was widely published in newspapers in 2007, including the New York Times, accompanying stories about the launch of our global language hotspots model.

In our role as scientists on a National Geographic expedition, we are working to raise public awareness of the global crisis of language endangerment and efforts at language revitalization. Since parts of Australia are also within a language hotspot, we hope to use information gathered there to refine our emerging model of global language hotspots. In Australia, we were strictly interested observers on a fact-finding trip. We are not engaged in the documentation of Australian languages, work which is being expertly done by many scholars. We are fully aware and supportive of the many linguists and anthropologists who are working in the region. We've sent copies of our recordings back to the communities that originated them and are also offering to share them, as permitted by those communities, with interested scientists from outside the communities. Our focus on this expedition was on talking with local, Aboriginal language experts and hearing what they had to say for themselves about language revitalization and cultural survival. We hope to use these materials in the future to raise awareness of the global crisis of language endangerment, and to attract greater interest, attention, and resources to this kind of work. We are currently working with three local groups in Australia to help obtain grant funding for their projects.