Reached by four major ocean currents, including upwellings of deep water rich in nutrients, the Galápagos Islands off the coast of South America are a hotspot of biodiversity. Coexisting at this junction are tropical and temperate species and species typically found farther south. Many are found nowhere else on Earth, and their unique characteristics famously inspired Charles Darwin’s theory of evolution by natural selection.

The islands are among the most singular and irreplaceable areas in the world, harboring over 2,900 known species of fish, invertebrates, and marine mammals, in addition to endemic seabirds, the world’s only marine iguana, and the world’s highest abundance of sharks. Of these marine animals, 57 are included on the IUCN Red List of Threatened Species. 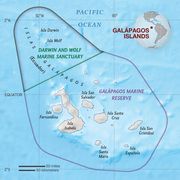 Despite the Galápagos Islands’ unparalleled value to our natural heritage, little scientific information existed on their marine ecosystems beyond the narrow, shallow strip of ocean surrounding the archipelago. And, until recently, less that 1 percent of the islands’ waters was fully protected from fishing.

To understand the broader marine ecosystem of the Galápagos, the Pristine Seas team carried out an expedition to the archipelago in collaboration with the Galápagos National Park and the Charles Darwin Research Station. They used high-tech methods—including rebreathers, a manned submersible, 360-degree imaging, satellite tracking of sharks, and National Geographic drop cameras—to survey and document its deep and offshore environments.

After exploring important mangrove habitats on the main islands, the team journeyed 240 kilometers to reach the remote northern islands of Darwin and Wolf and their legendary waters—known as the sharkiest on Earth. Unusually high visibility due to an El Niño event gave the team striking views of the area’s rich life.

While diving off Wolf Island, they didn’t find the abundance of groupers, snappers, and other reef predators that are present in protected, no-take areas—representing a large gap in the middle of the food chain. At Darwin, however, they saw some of the important carnivores that had been missing from Wolf, as well as abundant apex predators, such as the island’s celebrated hammerhead sharks. Still, fewer than expected shark numbers were recorded at both locations, a phenomenon also attributable to El Niño.

The 133,000-square-kilometer Galápagos Marine Reserve, established in 1998, covers an area of 40 nautical miles from the islands’ coasts, as well as inland waters such as lagoons and streams. But while industrial fishing here was banned, smaller scale fishing was still allowed throughout most of the reserve, placing sharks, groupers, sea cucumbers, and other marine life at risk.

On February 12, 2016, Pristine Seas founder Enric Sala and Spanish artist and conservationist Miguel Bosé met with Ecuadorean President Rafael Correa to discuss the important findings from the December expedition and the need for stronger conservation measures.

In March 2016, Correa announced the creation of a new marine sanctuary around Darwin and Wolf that will protect about 40,000 square kilometers, or about a third of the Galápagos Marine Reserve.

The new marine sanctuary is a fully protected no-take zone, off-limits to any extraction activities, including fishing. According to Sala, “Ecuador has shown tremendous leadership by protecting one of the most globally valuable places in the ocean.”

Currently, marine-based tourism supports more than a third of all jobs in the Galápagos, bringing nearly $178 million per year to the local economy. The tourism value of a shark over its lifetime in the Galápagos is $5.4 million, while a dead shark brings fishermen less than $200, according to a recent economic study by the National Geographic Society and the University of California, Santa Barbara.

And the protected area will ultimately benefit those fishing in waters outside the sanctuary, according to Sala. “We know that well-enforced no-take zones result in spillover of fish that increases fishermen’s incomes,” he says.