The Desventuradas Islands. Despite their name, meaning “unfortunate” in Spanish, the islands of San Ambrosio and San Félix lie amid some of the most pristine waters in the eastern Pacific. Off their rocky coasts, Juan Fernández fur seals play in one of their only homes on Earth, and yellowtail jacks hunt in forests of swaying kelp. Twenty-five meters below the surface, on the dark face of a volcanic rock, long-spined sea urchins cling and feed by the thousands. And hiding at deeper depths are fragile corals, 15-pound lobsters, deep-sea sharks, and strange jellies dancing hypnotically in the water column.

Running between the islands and mainland Chile is the north-flowing Humboldt Current, which creates a biogeographic barrier responsible for the Desventuradas’ unique diversity of life. Here, marine species from tropical, subtropical, and temperate zones converge, and the biome can more closely resemble that of the central and South Pacific despite the islands’ proximity the South American continent.

About 750 kilometers to the south, the Juan Fernández archipelago is home to fishermen who travel seasonally to the Desventuradas in pursuit of the islands’ giant lobsters. 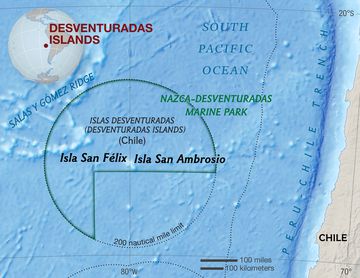 In February and March 2013, Pristine Seas founder Enric Sala co-led an expedition to these remote islands in collaboration with Alex Muñoz, then at Oceana Chile. Their goal was to explore, survey, and film the islands’ mysterious underwater ecosystem, from the surface to thousands of meters below.

Prior to the expedition, very little scientific information existed about the marine environment of the Desventuradas. Not a single underwater photo could be found, and the team’s divers were among the first to explore the unknown territory.

Over the course of the three-week expedition, they used state-of-the-art technology—including closed-circuit rebreathers, drop cams, and the DeepSee submersible—and captured hundreds of hours of video and thousands of photos.

Some of the species surveyed, such as the Juan Fernández fur seal—these waters’ largest predator—and the Chilean sandpaper fish, are endemic to the Desventuradas and the Juan Fernández archipelago. Others were entirely new to science, and, overall, the fish biomass was the largest ever measured in the Pacific waters of South America.

The expedition resulted in a comprehensive scientific report on the marine life of the Desventuradas. The report included a proposal to create a large marine park surrounding the islands, expanding beyond the area where Juan Fernández’s small-scale fishermen have caught lobsters since 1901.

The proposal aimed to protect this unique ecosystem and help rebuild depleted fisheries in the South Pacific Ocean while ensuring the future of the Juan Fernández community’s lobster fishery. The community supported the proposal and presented it to the Chilean government.

On October 5, 2015, President Michelle Bachelet announced the creation of the Nazca-Desventuradas Marine Park, the largest marine reserve in the Americas, encompassing 300,000 square kilometers of ocean surrounding San Ambrosio and San Félix. Fishing and other extractive activities are off-limits inside the park.

The new protected area tripled the percentage of Chile's waters that are under the strongest protections. The Chilean Navy, which maintains a small garrison on San Félix, helps to enforce the no-fishing rules.

Team divers surprise the neighborhood fur seals. Masked boobies come in for a closer look at the DeepSee. A Valentine’s Day dive becomes “a great big lovefest,” complete with Mola mola. A crab holds up the sun. The ocean’s cutest predators get excited. Human debris creeps in on the deep. A lobster hitches a ride on Manu’s face. For the record, the lobsters here get THIS BIG.