Sunlight shines into St. Peter's Basilica, a church in the Vatican in Rome, Italy.

Photograph by Fred Zimny, My Shot 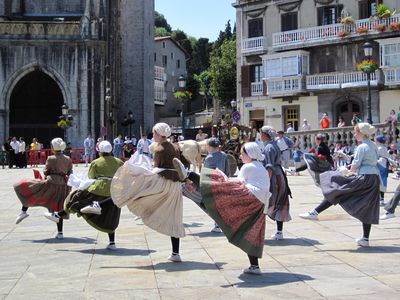 Students discuss their ideas about what makes a group, which groups might cause conflict when combined in the same country or area, and what religions and languages are present in Europe.

1. Brainstorm what makes a group.

Ask: What is a group? Have a whole-class discussion about what makes a group. Ask: What can groups be based on? Write students' ideas on the board. Encourage students to include criteria such as religious affiliation, language, race, and nationality, and to think of different ways people might describe themselves.

2. Have pairs or small groups identify groups, at different scales, that they know.

Divide students into pairs or small groups and distribute a copy of the Five-Column Chart to each group. Draw a five-column chart on the board and model labeling the chart with the following headings: School, City, State, Country, and Continent. Have each pair or small group label their charts and list as many groups in each category as possible. Provide support, as needed.

3. Have a whole-class discussion about the groups students identified.

Have each pair or group share their list with the class. Compile a class list on the board in the five-column chart you drew. Allow students to share their ideas without correction. Then ask: Which of the groups might need to have their own region to live in? Which groups do you think can or should be mixed together? Tell students that in the next few lessons of this unit, they will explore the human geography of Europe, including different language and religious groups and where those groups are found in different parts of Europe.

4. Have students list what they already know about languages and religions in Europe.

Ask students to look back at the notes about Europe the class took in Lesson 2: Gathering Ideas About Europe. Have students review their initial ideas about language and religion in Europe. Distribute a copy of the worksheet Cultural Overview of Europe to each student. Have students record their ideas about language and religion in item 1 on the worksheet. Tell students they will revisit the list from Lesson 2 again later in this unit, when they will make changes to the list based on what they learn.

5. Have students read a passage and answer questions.

Have each student write a reflective journal entry that addresses the following questions:

Activity 2: The Languages of Europe 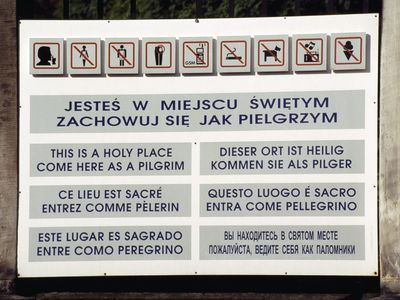 Students read about language families and languages of Europe. They compare and contrast a map of dominant languages in Europe to a political map of Europe and discuss similarities and differences.

1. Have students read a passage about languages of Europe.

2. Have students compare and contrast maps of language groups and political boundaries.

3. Have a whole-class discussion about the languages of Europe.

Have students apply these ideas about groups and regions to the issue of human migration. Ask students to write about what it would be like for a group of people to move into a region where the rest of the population spoke a different language. Have them include details about the difficulties the new group would face and what choices the people within that region could make about how to handle the newcomers.

Activity 3: The Religions of Europe 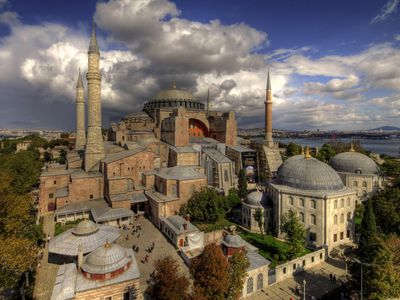 Students read about dominant religions in Europe. They compare and contrast a map of religious groups in Europe to a political map of Europe and identify areas in Europe where they might expect conflict over religion.

1. Have students read a passage about religions of Europe.

Divide students into pairs. Distribute a copy of the worksheet Religions of Europe to each pair. Have partners read the passage. Answer any questions they may have.

2. Have students compare and contrast maps of dominant religions and political boundaries.

Have students complete the worksheet by comparing and contrasting religious groups and political boundaries. As you walk around the class, check for student understanding of religious groups.

3. Have a whole-class discussion about religions of Europe.

4. Have students reflect on what they learned about languages and religions in Europe.

Use the three overhead map transparencies to look at how major language and religious groups of Europe align with and/or cross country borders. As a class, map all of the possible conflict areas by shading areas on the Country Borders in Europe map transparency. Then ask:

Project or post the questions from Step 4 in a visible place in the classroom and ask students to work independently to write their answers to the questions.

IRA/NCTE Standards for the English Language Arts Standard 9: Students develop an understanding of and respect for diversity in language use, patterns, and dialects across cultures, ethnic groups, geographic regions, and social roles.National Council for Social Studies Curriculum Standards Theme 1: Culture Theme 5: Individuals, Groups, and InstitutionsNational Geography Standards Standard 1: How to use maps and other geographic representations, geospatial technologies, and spatial thinking to understand and communicate information Standard 10: The characteristics, distribution, and complexity of Earth's cultural mosaics Standard 13: How the forces of cooperation and conflict among people influence the division and control of Earth's surface Standard 4: The physical and human characteristics of places

Students will need to pull their notes from Lesson 2, Activity 2 out of their portfolios to complete the worksheet in this activity.

Before starting the activity, make transparencies of key maps. Print the following maps on transparency paper: Country Borders in Europe, Dominant Languages of Europe, and Dominant Religions of Europe.

Some groups cause conflict when combined in the same country or area. You can look at languages and religions in Europe to see how cultural differences have divided Europeans. Europeans speak a variety of languages. They worship in many different churches, mosques, and temples. They have diverse language backgrounds. For centuries, Europeans’ cultural differences contributed to a war-torn landscape. Armies battled over which church would minister to the people or which group would control a territory. In the 20th Century, millions died in World War I (1914-1918) and World War II (1939-1945). Both wars began in Europe. They were fueled in part by these cultural divisions. Today, language and religion still divide Europeans. However, they are also united in organizations such as the European Union, Council of Europe, and United Nations. These organizations resolve problems through negotiation and cooperation.

Although small in area, Europe has been a world interaction zone of people and cultures. A key cultural component that shapes national and cultural identity in Europe is language. There are over 30 languages spoken in Europe today. Most Europeans speak an Indo-European language. Indo-European languages developed during the Neolithic times in the Middle East. Through immigration, they spread into Europe and displaced/drove out the languages that were originally spoken on the continent. There are six Indo-European languages spoken by millions of people in Europe today, including: Hellenic (Greek); Romance (Latin-based languages of the Mediterranean and Romanian); Celtic (largely extinct, but Gaelic, Welsh, and Breton); Germanic (Scandinavian languages, modern German, Dutch, and English); Balto-Slavonic; and Illyrian-Thracian (Albanian). There are also several prominent non-Indo-European languages in Europe. These languages belong to their own language families, including the: Uralic family (Finn-Ugric); Semitic family (Arabic and Hebrew); Altaic family (Turkish); and Basque (unknown origin). Languages are evolving in Europe at an incredibly rapid rate—just as English is evolving in the United States. Developments such as text messaging and the Internet are creating new methods of communication in all languages. Many European languages have seen an influx of English words due to the rise of the Internet and diffusion of technology with English names. For example, since the rise of the Internet, Hungarian has adopted the words email and Internet, as well as added verbs that mean to email and to go on the Internet (emailezik and internetezik respectively).

Another key cultural component that shapes national and cultural identity in Europe is religion. Religion has been a prominent part of European culture and identity since before the Roman Empire. However, it was during the Roman Empire that different religions began to recruit and convert others and expand beyond their regional centers in Europe. There are three methods for measuring the religiousness of a population: affiliation, practice, and belief. The first method, affiliation, is the loosest measurement of one's religion; it refers to when people are born into or associated with religions, even if they do not practice or even believe in them. Countries with high affiliation in Europe are still very common, though in many countries affiliation is much lower than in the United States. The next method of measurement is practice. When analyzing the amount of people that actually practice a religion—meaning they pray regularly or attend holy services—the numbers in Europe drop dramatically. It is important to note that this is place specific. The final method, belief, varies by religious background. In some countries, belief can be affected by political situations. The major religions currently dominating European culture are Christianity, Islam, and Judaism. Though Europe is predominantly Christian, this definition changes depending upon which measurement is used. In the Balkans, a handful of states have a majority, plurality, or large minority of the population that is affiliated with Islam. These states include Albania, Kosovo, Bosnia Herzegovina, and Macedonia. In addition, Arab, Turkish, and other non-European originating immigration has increased the number of people practicing Islam throughout Europe. Most of the Jewish populations of Europe were eradicated or forced to flee before and during World War II. Afterward, many of those surviving resettled in Israel. Following the two world wars, Christianity in Europe has largely begun to wane. Though it is still very much a cultural component, the amount of people practicing and affiliating with churches continues to rapidly decline.

the ratio of the total number of live births to the total population in a given time and area.

one of the seven main land masses on Earth.

international organization based in Strasbourg, Germany, established "to promote democracy and protect human rights and the rule of law in Europe."

having to do with characteristics of a group of people linked by shared culture, language, national origin, or other marker.

able to speak, write, and understand a language.

system or order of a nation, state, or other political unit.

the movement of people from one place to another.

process of moving to a new country or region with the intention of staying and living there.

set of sounds, gestures, or symbols that allows people to communicate.

group of languages descended from a common ancestral language.

total number of people or organisms in a particular area.

a system of spiritual or supernatural belief.

land an animal, human, or government protects from intruders.

international organization that works for peace, security and cooperation.

Students may be unfamiliar with the concept of denominations or sects within a religion. Build scaffolding by tapping into their likely familiarity with major religions, such as Christianity, and the names of denominations within them.