This Soviet Class Er locomotive is now used as a tourist train around Moscow.

Photograph by Harvey Smith, My Shot 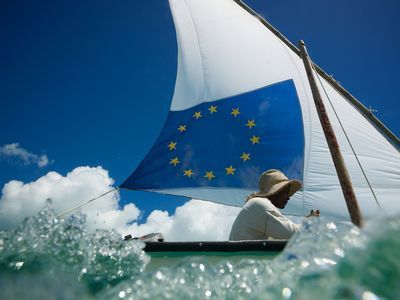 Project the provided MapMaker 1-Page Map of Europe on the board. As a whole class, review physical and cultural features of Europe from the past several lessons by asking students to come to the front of the room to draw features on the map. Ask: Which of these features have changed over the past 100 years? How have they changed? If students have difficulty, explain to students that, although physical features don't change much over time, our relationship to those features does change. For example, rails replace rivers for transport, roads make mountains passable, some streams change course, and natural resources are used. Cultural groups constantly evolve and migrate, some groups are assimilated into others, and sometimes new groups emerge.

2. Build background on the European Union.

Explain to students that they will compare maps of European borders at three points in history. One of those points is the European Union as of 2011. Explain to students that the European Union, or EU, is an association of European countries formed in 1993 for the purpose of achieving political and economic integration. If possible, bring in euros, the official currency of the eurozone, as realia for students to see and touch.

3. Have students compare and contrast three maps of Europe from different times.

Distribute three maps to each student: Europe, 1920; Europe, 1960; and The European Union, 2011, or project the maps on the board. Ask students to work independently to highlight borders that have stayed fairly consistent over time. Using a different color, ask students to highlight the political borders that have changed significantly over time. If you have the map transparencies, overlay them to show how borders have changed. If students have difficulty identifying changes, prompt them with questions like the following:

4. Have students compare and contrast historical maps of Europe and a physical map.

Ask students to write notes about their ideas on their historical maps.

5. Have students compare and contrast historical maps of Europe and cultural maps.

Distribute copies of the maps Dominant Languages of Europe and Dominant Religions of Europe, or have students access these maps from their portfolios. Have students answer the same questions for cultural groupings. Ask: Can these explain stable and/or shifting borders in Europe? How? Ask students to write notes about their ideas on their historical maps.

Check for student understanding by viewing their notes as they compare and contrast the three maps with physical and cultural maps, and questioning their thinking.

Activity 2: Compare Changes in Europe to Your State or Region 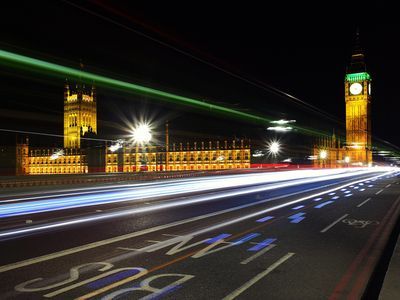 Students compare changes in Europe over the past 100 years to maps of their own state or region and identify similarities.

1. View maps of your local area or state over time.

Project or distribute the maps you gathered of your local area or state over time. For each map, make sure students can identify the type of map, recognize key map elements, and interpret the information in the maps. Answers questions, as needed.

2. Have small groups compare changes in Europe to your state or region.

3. Have a whole-class discussion about groups' ideas.

Regroup as a whole class and invite volunteers from each small group to share their group's ideas about similarities between changes in Europe and changes in your local area or state. Encourage students to back up any opinions with facts and examples of physical features, cultural features, and border changes over time. Provide guidance, as needed, to help students discriminate between: true parallels in the changing borders of Europe and your state or region; and changes from causes not based on language, religion, or physical boundaries.

Assess student answers to the question in the activity or have students write a brief summary about their own state in comparison to Europe.

Before starting the activity, make transparencies of key maps. Print the following maps on transparency paper: Europe, 1920; Europe, 1960; and The European Union, 2011.

Before starting this activity, you will need to gather electronic or hard copy versions of several maps of your state or local area over time.

In 1914, some of the most powerful countries of Europe formed rival alliances, with Germany, Austria-Hungary, and Italy in one alliance, and Russia, the U.K., and France in another. When Russia and Austria-Hungary intervened in fighting that broke out in the Balkans, the rest of Europe was plunged into World War I, which lasted from 1914-1918. In the years after World War I, revolution and civil war impacted Russia, Germany, and the remains of Austria-Hungary. Europe as a whole was greatly changed as a result. Russia and Germany became dramatically smaller, and the Russian revolution of 1917 led to the creation of the Soviet Union. In addition, many smaller states appeared.

World War II began in 1939, when Germany's invasion of Poland forced Britain and France to declare war on Germany. By 1942, most of Europe was under the control of Germany and its allies. But by 1945, the German army was weakened by a reviving Soviet Union, and the war ended in spring of 1945. Afterward, Germany was much smaller in size and divided into East and West. And the U.S.S.R. included Estonia, Latvia, Lithuania and Ukraine, and occupied northern East Prussia.

At the end of World War II, many European intellectuals, politicians, and populations as a whole were tired of conflict. They saw an opportunity to finally create a unified Europe that would not descend into violent conflict again. Thus, the idea of a pan-Europe, or United States of Europe, was born. The European Union, or EU, started out as merely a treaty among six nations to trade steel and coal for free with one another. Six countries—the Netherlands, Belgium, Luxembourg, Germany, France, and Italy—formed the European Coal and Steel Community (ECSC). The ECSC was such a wild success that these countries eventually signed further treaties eliminating many of the tariffs on other products between them. As the economic union grew, other states decided they wanted to join. The ECSC became the European Economic Community, and began accepting new members. Eventually, states began to give up more of their political sovereignty to the community. After the fall of the Soviet Union in 1991, it was decided that the geopolitical climate was ripe for countries to join a true European Union—a Union with some political capacity—and to unify currencies. This goal was established and signed into law in 1992 at the Treaty of Maastricht. The euro was unveiled to the public on January 1, 2002. States rid themselves of their former currencies and joined economic forces with the new one in the "Euro Zone."

During this unit on using maps to understand European physical and cultural landscapes, students have developed skills in map analysis and mapping that analysis to specific situations. Having students compare changes in Europe to changes in their own state, local area, or communities through maps serves a dual purpose: it helps move students toward the goal of seeing maps as tools for understanding our world; and it also helps students find personal relevance in the content, which will help them to retain the information they have learned.

sixth-largest continent and the western part of the Eurasian landmass, usually defined as stretching westward from the Ural mountains.

symbolic representation of selected characteristics of a place, usually drawn on a flat surface.

political unit in a nation, such as the United States, Mexico, or Australia.

(1914-1918) armed conflict between the Allies (led by the United States, the United Kingdom, and France) and the Central Powers (led by Germany and Austria-Hungary). Also called the Great War.