Men cross a bridge made of two logs as they hike to Base Camp on Mount Everest in 1963 in preparation for a team from the United States to attempt to summit.

This lists the logos of programs or partners of NG Education which have provided or contributed the content on this page. In collaboration with

Activity 1: The Evolution of Climbing Everest 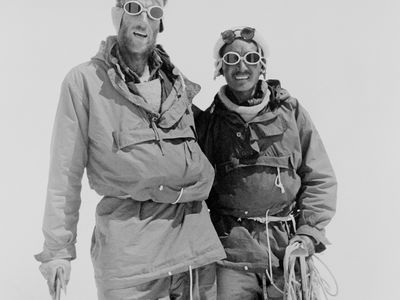 Students explore the changes in climbing Mount Everest over time. They identify changes to equipment, especially considering changes that have evolved due to the popularity of mountaineering. Students then consider how changes in popularity have guided governmental regulation. They analyze how the changes may positively and negatively affect the impact climbing Everest has on the environment and safety of climbers.

1. Lead a class discussion to activate students' prior knowledge by connecting this activity to the idea of change over time.
2. Use video and images to share with students the ways in which climbing gear has changed over time, encourage them to consider whether improvements in technology have positively or negatively impacted safety.
3. Have students read to learn about two disasters on Everest caused by increased traffic at the summit.
4. Have students read to learn positive impacts and changes resulting from the increase in popularity of climbing Mount Everest.
5. Facilitate a reflective discussion about how the changes to mountaineering over time have both positively and negatively affected Everest, especially in terms of the environment and safety.

Check in with small groups listening for understanding of how the changes in mountaineering have both positively and negatively impacted Mount Everest and mountaineers attempting the climb. Ask clarifying or guiding questions to move students towards an understanding of both perspectives if they have not fully developed a balanced perspective. Visually check their record of changes reminding students of the importance their notes will have on their culminating project.

Science Extension: Have students conduct an experiment to determine differences in fabrics worn in extreme environments in 1924 and today using the Expedition Clothing: Then and Now. The video How the Chemistry of Clothing Protects You on Everest video also provides valuable information about science in the clothing. 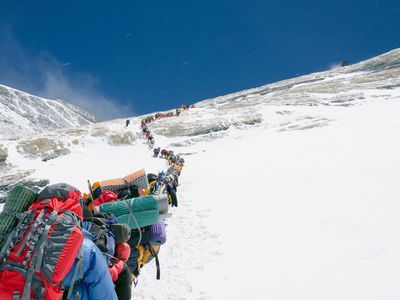 In groups, students explore resources outlining what it costs to summit Everest. They learn the important role Sherpas play in a successful summit, as well as what one must plan for to leave no trace.

1. Engage students in an analysis of this Everest infographic as they infer various costs based on their observations.
2. Have students read articles to learn in-depth about what it takes physically, financially, materially, environmentally, and in personnel to summit Everest.
3. Have students share what they discovered while reading with peers and reflect on the costs of summiting Everest.

Collect and review students’ Cost of the Climb worksheet, looking for at least one example of each type of cost (physical, financial, material, personnel, and environmental). Make suggestions for resources to review for students who may be missing examples from the main cost categories.

Math and Computer Skills Extension: Have students use the resources provided in this activity to predict an overall cost for an individual climbing Mount Everest that includes travel, equipment, personnel, and other potential monetary expenses. Students practice using computer-based spreadsheets to label and categorize data and develop formulas to predict expenses. Use the spreadsheet to create a graph that breaks down the fraction/percentage of expenditures for items such as regulatory fees, supplies, and expedition charges.

ELA Argumentative Writing: Have students debate verbally or through argumentative writing whether or not climbers should tackle Mount Everest if they are heavily reliant upon supports.

Activity 3: Tourism, Waste, and the Effects of Climate Change on Everest 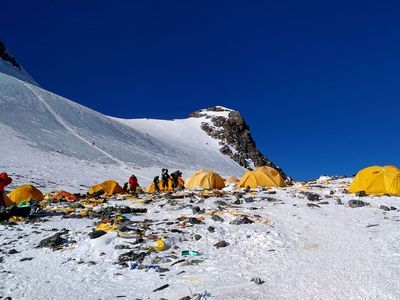 Students explore how much waste climbing expeditions to Mount Everest produce. Students consider the impact of climate change on waste production and current attempts to address the problem. Students evaluate best practices in preparing for and embarking on Leave No Trace expeditions.

1. Use a variety of media to facilitate a discussion about how garbage is dealt with on Everest.
2. Poll students to determine their current position on the following topics related to waste on Mount Everest.
3. Engage students in a jigsaw reading to become experts on an article in order to collaboratively evaluate Mount Everest’s problems and to propose solutions.
4. Revisit the survey questions from Step 2 to see if students’ opinions have changed.
5. Connect students to the final project and practice identifying a right.

Oral Presentation of Leave No Trace Best Practices: Students brainstorm and write a draft of a right that relates to the impact of climbers on Everest.

Design & Engineering Extension: After reading one or more of the suggested articles, have students determine what type of pollutant is the most problematic or troublesome for Mount Everest. Have students design and create a mock-up of an invention that might help reduce this pollutant’s impact on the mountain. This invention should be lightweight and portable for backpacking mountaineers. Students should write a narrative explaining how it works.

Local Research Extension: Have students research, discover, and share how biogas projects may be impacting your local area.

Common Core State Standards for English Language Arts & Literacy CCSS.ELA-LITERACY.RH.6-8.2: Determine the central ideas or information of a primary or secondary source; provide an accurate summary of the source distinct from prior knowledge or opinions. CCSS.ELA-LITERACY.RI.6.7: Integrate information presented in different media or formats (e.g., visually, quantitatively) as well as in words to develop a coherent understanding of a topic or issue. CCSS.ELA-LITERACY.SL.6.1: Engage effectively in a range of collaborative discussions (one-on-one, in groups, and teacher-led) with diverse partners on Grade 6 topics, texts, and issues, building on others' ideas and expressing their own clearly. CCSS.ELA-LITERACY.WHST.6-8.1.B: Support claim(s) with logical reasoning and relevant, accurate data and evidence that demonstrate an understanding of the topic or text, using credible sources.  Speaking and Listening Standards 6-12: Comprehension and Collaboration, SL.8.1.The College, Career & Civic Life (C3) Framework for Social Studies State Standards D2.Civ.13.6-8: Analyze the purposes, implementation, and consequences of public policies in multiple settings. D2.Civ.1.6-8: Distinguish the powers and responsibilities of citizens, political parties, interest groups, and the media in a variety of governmental and nongovernmental contexts. D2.Eco.1.6-8: Explain how economic decisions affect the well-being of individuals, businesses, and society. D2.Geo.4.6-8: Explain how cultural patterns and economic decisions influence environments and the daily lives of people in both nearby and distant places. D2.His.14.6-8: Explain multiple causes and effects of events and developments in the past.

Allow students who may struggle with handwriting to copy and paste relevant parts of their best practices recommendations onto a computer-based document, such as Word or Google Docs.

Conquering Mount Everest’s summit has been many a person’s dream since it was identified as the highest point on the Earth’s surface in 1852. Since the first summit attempts in the 1920s and continuing to today, technologies have been evolving, making it easier for anyone with enough money to be able to attempt the climb.

As a consequence of this evolution, the way people prepare for and experience the ascension of Mount Everest today is different than it was in the past. These changes have affected the lives of mountaineers, those who live and work around Everest, like the Sherpa, and the environment on Everest itself. Up until about 1990, foreign climbers often established the climbing route, fixing ropes and maintaining the climbing route or path during the course of the climbing season. Now, a disproportionate amount of risk is taken by the local climbers who not only help carry equipment to the various mountain camps, they also establish, fix and maintain the route. Generally speaking, the increasing professionalism of the local guides improves the overall safety of everyone traveling on Everest; though, ironically, those with improving skills accept more risk in providing safety for others.

The environment of Everest is heavily impacted by mountaineering tourists. This impact includes increasing waste, both in terms of left-behind objects and biological waste left behind on the mountain. As the number of climbers increases, the need to ensure waste comes off the mountain is becoming a focus for conservationists and mountaineers.

This lesson is part of the Mount Everest: What Goes Up Should Come Down unit.

fuel produced by bacteria helping to decompose organic material, such as plants and sewage.

gradual changes in all the interconnected weather elements on our planet.

to ascend or go up.

management of a natural resource to prevent exploitation, destruction, or neglect.

act and industry of traveling for pleasure with concern for minimal environmental impact.

journey with a specific purpose, such as exploration.

having to do with money.

tourism that sustains or enhances the geographical character of a place—its environment, culture, aesthetics, heritage, and well-being of its residents.

someone who climbs mountains.

highest spot on Earth, approximately 8,850 meters (29,035 feet). Mount Everest is part of the Himalaya and straddles the border of Nepal and China.

employees or all people working toward a common goal.

having to do with the body.

people and culture native to the Himalayan region of Nepal and China. Sherpa often serve as mountaineer guides and porters on mountain-climbing expeditions.

responsible management to ensure benefits are passed on to future generations.

highest point of a mountain.

industry that seeks to have the least impact on the places and cultures visited, while contributing to the local economy.

the industry (including food, hotels, and entertainment) of traveling for pleasure.

Step 5: If students have not yet learned about the concept of rights, pre-teach that vocabulary word prior to this step.

Step 2 and 4: Use an online survey or polling tool in order to quickly see the results of the survey and to engage students through their personal devices or one-to-one technologies.

Step 2 and 4: Use colored dots stickers to chart survey responses on chart paper. Ask students to stack their dots one above the other in the Yes or No columns to indicate their response. This will create a visual bar graph. Use one color for their initial opinions and a different color to chart opinions after the reading.