This lists the logos of programs or partners of NG Education which have provided or contributed the content on this page. With Support From 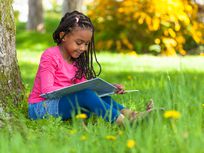 Whether used as a read-aloud or individual reading, picture books are a great introduction to national parks and other outdoor spaces.

Whose Tracks Are These? A Clue Book of Familiar Forest Animals, by James Nail

A series of clues guides readers to discover who left the tracks shown on the page. This book is a good introduction to tracks and other clues left behind by animals in parks. —recommended by Amy Blonn, Texas

This pop-up book features 18 national parks. Beside the large pop-ups with illustrations based on the Works Progress Administration posters from the 1930s, it also features mini pop-ups that show action in the parks. It was a Gold Medal Winner-Children's Picture Book (All Ages) by Independent Publisher Book Awards 2013.

Who Pooped in the Park? series, by Gary D. Robson

This series follows Michael and Emily as they learn about the animals in our national parks. In each book they visit a different park and learn about its animals through the scat and tracks they leave behind. —recommended by Anne Haywood, Florida

The Curious Garden, by Peter Brown

A young boy walking through his city discovers a garden and nurtures it back to health, spreading green throughout his dark, gray city. This book could be an inspiration for creating or improving a small park or garden in your neighborhood. —recommended by Cindy Olson, Virginia

Though not set in national parks, this series offers a look at different ecosystems, such as the Florida Everglades. Each book focuses on one animal at one time of year. —recommended by Jennifer Murphy, North Carolina

Insectlopedia, Mammalabilia, and other animal poetry books by Douglas Florian 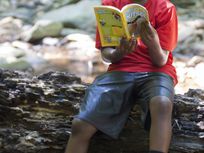 These chapter books are good for older elementary kids who want to dig deeper into the national parks and other related topics. They can also be used as read-alouds for younger kids.

Mysteries in Our National Parks, by Gloria Skurzynski and Alane Ferguson

Each book in this series from National Geographic is set in a different national park. Vivid descriptions of the parks and their animals are woven into the stories. —recommended by Ginny Judd, North Carolina

This series of leveled readers is based on the PBS series The Wild Kratts. The books take readers along with the zoologists the Kratt brothers as they explore different animal topics.

The Adventures of Bubba Jones: Time Traveling Through the Great Smoky Mountains, by Jeff Alt

Siblings Tommy and Jenny Jones travel back in time to meet the founders of the Great Smoky Mountains National Park, its earliest Cherokee settlers, and even get a glimpse of what the park was like millions of years ago.

Adventures with the Parkers series, by Mike Graf

These books for ages 8-12 focus on different national parks. Vetted by park officials and associations, they feature park information through engaging adventure stories. 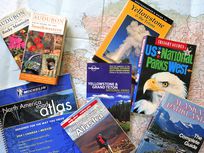 This guide to the national parks includes fun facts, photos, maps, and information about where to get the best views.

This book offers brief information about seventy-five national parks, organized by state. It includes photos, call-outs, and other interactive features.

This book based on the popular Junior Ranger programs includes trivia, games, jokes, facts, and more. 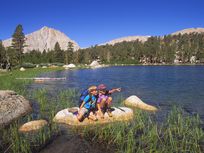 Websites for Research or Planning

These websites provide a wealth of information about national parks. Most include resources for educators and kids.

This site provides information and photographs of some of the most popular national parks.

This companion site to the Ken Burns documentary includes video clips, information about several parks, park history, and a place for people to share their park stories.

The official website of the National Park Service provides a way to look up every national park in the U.S. It also includes information for teachers and students.

This site provides a map with links to some national parks. The links lead to kid-friendly information and short videos about the selected park.

National Geographic Travel breaks down the best parks to visit with kids. 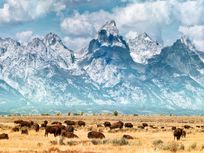 These videos provide a look at our national park system.

PBS Nature: In the Valley of the Wolves (season 26) 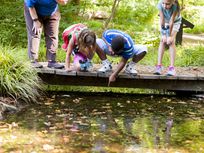 These websites feature activities and resources for exploring national parks or other wild spaces. Many activities can be adapted to a state or local park, as well. Be sure to check the websites of parks you plan to visit for activities specific to that park.

This site from Kids in Parks includes tips for hiking with kids.

This site offers information about activities to do with kids in several national parks.

This site includes ideas for activities in parks, hiking games, an activity booklet for use in any park, and more.