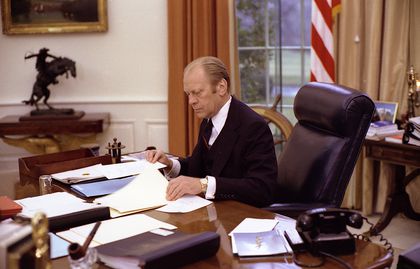 Gerald Rudolph Ford’s tenure as the 38th president of the United States of America was defined by his steady character, political integrity, and decision-making skills. Ford’s political career began in 1948 when he was elected to the United States House of Representatives where he served for 25 years. He was selected as the House minority leader in 1965 and maintained that position until 1973 when Richard Nixon named him vice president. Gerald R. Ford was sworn in as president of the United States on August 9, 1974, after the resignation of Nixon. During his term, President Ford made many notable decisions including granting aid and asylum to refugees of the Vietnam War; signing the Helsinki Accords in August 1975; and advocating for the Energy Policy and Conservation Act, which was passed by Congress in November 1975.

Use the educational resources on this page to teach about Gerald R. Ford and the important events of his time. The resources include a full-length documentary, an online interactive, educator guides, stand-alone lessons, media spotlights, and geostory timelines.

Teach about the life and legacy of the 38th president with this documentary film and accompanying educator guide. 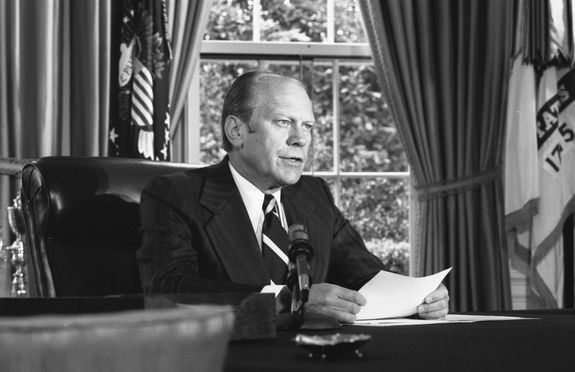 Students deconstruct President Gerald R. Ford’s decision to sign the Helsinki Accords with the Soviet Union and NATO allies in 1975.

Students take on the role of advisors to President Gerald R. Ford in drafting the Energy Policy and Conservation Act of 1975.

An online activity that puts students in the shoes of Gerald R. Ford

In You Decide: Presidential Decisions, students take on the role of president of the United States and make complex decisions based on real situations faced by President Gerald R. Ford during his 1974-1977 presidency: the signing of the Helsinki Accords, the condemnation of South African apartheid, and Operation Babylift.

Explore major events in Ford’s life and presidency with our GeoStories.

Gerald Ford's Rise to the Presidency

From humble beginnings, Gerald R. Ford worked hard to make his way to becoming the 38th president of the United States of America.

The 38th President of The United States

Gerald R. Ford inherited a presidency that had lost the trust of the American people and faced national and international challenges such as inflation, unemployment, and the end of the Vietnam War.

Use these clips from Gerald R. Ford: A Test of Character to spark classroom discussion.

Explore these collections for related lessons, activities, and reference content.