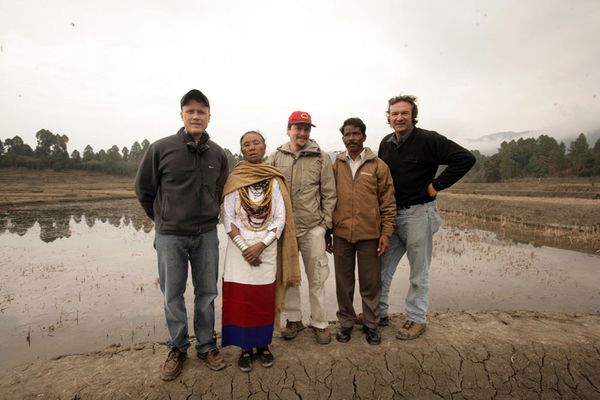 Dr. Gregory Anderson : Gregory Anderson directs the Living Tongues Institute for Endangered Languages , a nonprofit organization dedicated to the documentation, revitalization, and maintenance of endangered languages. He specializes in the languages of Siberia. He studied at Harvard and the University of Chicago and has conducted extensive fieldwork into the languages of the Altai Sayan group. Anderson has done fieldwork in Nigeria on Eleme, in India on the Munda languages, in Bolivia on Kallawaya, and in Oregon on Athabaskan. He has published widely in the fields of historical linguistics, descriptive grammar, morphology, verb typology, and the linguistics of Munda, Salishan, and Ogonoid languages.

Dr. K. David Harrison : David Harrison is associate professor of linguistics at Swarthmore College and director of research for the Living Tongues Institute for Endangered Languages. His research focuses on endangered and little-documented languages, with primary emphasis on Turkic languages of Inner Asia (Central Siberia and Western Mongolia). To date, he has investigated Tuvan, Tsengel Tuvan, Tofa, Ös (Middle Chulym), Tuha (Dukha), and Monchak. In 2005, he began fieldwork on three Munda languages of Northeast India, in 2006 on the Siletz Dee-ni language of Oregon, and in 2007 on the Kallawaya language of Bolivia. He is the author of When Languages Die: The Extinction of the World's Languages and the Erosion of Human Knowledge .

Both Dr. Anderson and Dr. Harrison lead the scientific research for the Enduring Voices Project.

Chris Rainier : Chris Rainier is a National Geographic Fellow and ethnographic photographer and filmmaker. In addition to his work as the Enduring Voices Project photographer, Chris also oversees the project's Language Revitalization Program. Rainier also directs the All Roads Photography Program and is a contributing editor for National Geographic Traveler magazine, specializing in culture. In addition, Chris is a contributing photographer for National Geographic Adventure magazine, and a correspondent on photography for National Public Radio's Day to Day show. Chris' life mission is to visually document endangered cultures around the globe. He has traveled to all seven continents, including extensive expeditions throughout Africa, Antarctica, and New Guinea.