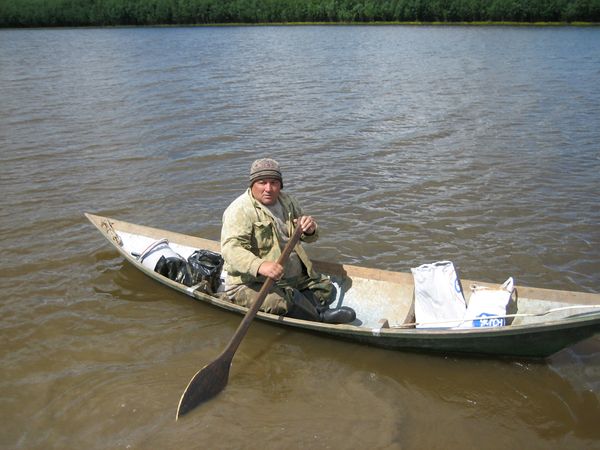 The central Siberian language of Chulym is nearly extinct, with fewer than ten fluent speakers remaining. A recent expedition by an Enduring Voices team sought to build on previous work to salvage, record, and analyze what remains of this ancient tongue. During this trip, the group conducted interviews with four fluent Chulym speakers and uncovered a mythical tale documented by Russian researchers in 1971 but never published. Linguists Greg Anderson and David Harrison are currently translating the Chulym stories they recorded and writing a grammar.

This Enduring Voices expedition was devoted to documenting a nearly extinct language of central Siberia called Chulym. Chulym, which now has fewer than ten fluent speakers, lies within the Central Siberia Language Hotspot.

The Chulym people were traditionally hunter-gatherers and fishers. Their livelihood, and also their name for themselves, derives from the Chulym River, which flows for over 1,000 miles (1,610 kilometers) in a westerly direction and empties into the Ob River. At first contact with Europeans, in the mid-18th century, the Chulym people lived in birchbark tepees, wore fur clothing, and had no domesticated animals other than dogs.

The Chulym watershed is a low-lying, marshy ecosystem with rich plant, insect, bird, and mammal species and drastic seasonal fluctuations in temperature. Chulym culture, subsistence, and traditional knowledge center around river navigation and fishing, gathering of berries and roots, and hunting with snares and weapons. All Chulym knowledge systems are in decline: Use of medicinal plants has mostly been forgotten, as have the ecological (lunar) calendar systems, taxonomies of plants and fish, and techniques for making wooden dugout canoes, fur-covered skis, and fur clothing.

The Chulym people pose an interesting puzzle for genetics and the history of human migration. Descendants of an ancient local population, they are genetic and cultural kin to New World populations found in Alaska. At an unknown point in the past (possibly as late as the 18th century), they shifted from their ancient and unidentified language (likely belonging to Yeniseic, a now nearly extinct language family), and began speaking a Turkic language. Though they shifted languages, they kept many ancient place-names (especially river names) as well as vocabulary specific to animal, plant, navigation, and canoe-building technologies. By digging into the Chulym language, scientists can gain insights into ancient Siberian prehistory, as well as an understanding of human adaptation to some of the harshest living conditions known to mankind.

All cultural, story, and speech traditions of the Chulym people are in drastic decline and have been only scantily documented. Our work within the Enduring Voices project is to salvage, record, and analyze the fragmented knowledge that remains. On this trip, our third to the region since 2003, we collected, recorded and translated a dozen new texts (stories, songs, and personal narratives) produced by V. M. Gabov, the youngest fluent speaker (age 57) and the only person who can write the language. We met and recorded Maria Tolbanova (born 1931), who was previously unnoticed by us and by the other remaining speakers. Maria has emerged as the oldest living fluent female speaker who is able to tell stories. We visited Anna and Aleksei Baydashev, the only remaining married couple who speak the language daily at home. We found in a local archive a mythical tale that had been written down in 1971 by Russian researchers but never published, and we translated it. There are no longer any speakers who can tell such myths.

The Chulym speaker population continues to decline sharply. Six speakers interviewed in 2003 and 2005 have passed away. Only three speakers remain who are able to work with us.

In 2009 we published a collection of the stories and word lists we collected on this and previous expeditions, making them available both to scientists and to the Chulym community.

Download the pdf version of the Central Siberian Expedition.