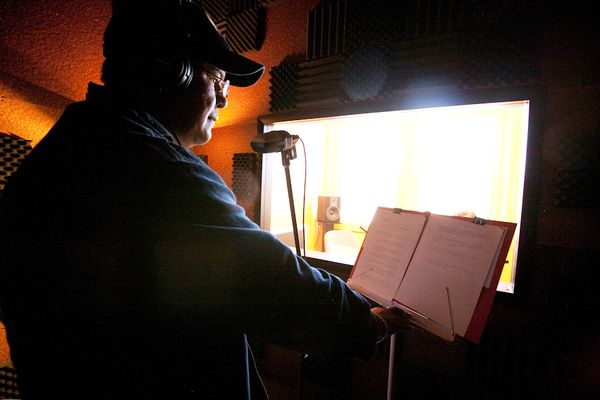 Andres Ozuna, a speaker of Chamacoco from Paraguay, records a story.

Members of the Enduring Voices team, Living Tongues fellows and project grantees convened for a ten-day Language Revitalization Workshop in Santa Fe, New Mexico, hosted by the Indigenous Language Institute. The workshop served as follow-up and continuation of our Enduring Voices field expeditions. By bringing together individuals we have identified as language activists, we facilitated a dialogue among them about language revitalization strategies. Workshop participants were trained in digital storytelling, desktop publishing, and videography/photography, and a secure website was designed to allow them to share these materials. Participants were given language technology kits and trained to use the equipment.

Mark Franco is the headman of the Winnemem Wintu Nation in California and has been working with the Enduring Voices project since December 2008. He is also a Living Tongues Fellow. He and his wife, Chief Caleen Sisk-Franco, lead language and cultural revitalization efforts in the community, as well as the struggle for water rights, land rights, the restoration of salmon stocks, and federal recognition.

“Without the opportunity to be involved in programs such as this, my language would be a dead language. We have been able to slowly revitalize what was once everyday conversation but was lost when we lost our fluent speakers.” –Mark Franco

Terrie Kinsey, who is of Cherokee and Euchee heritage, serves as the language program coordinator for the Sac and Fox Nation of Oklahoma. She creates and organizes language resources for tribal members to encourage interest in their language, for example by collecting clan stories from the elders to produce illustrated books.

Video: Terry Kinsey talks about the benefits of the revitalization workshop

Ganesh is a professor at the Department of Tribal Languages at the University of Ranchi in Jharkhand State, India. As a Living Tongues Fellow, he is working to document Santali and other Munda languages. Ganesh has also accompanied the Enduring Voices team on two field trips to Arunachal Pradesh, to document Tibeto-Burman languages spoken there.

Andres Ozuna is a speaker of Chamacoco (Ishir) from upper Paraguay. He has been compiling his own dictionary of the language. In 2009, he received an Enduring Voices “language technology kit” and by December of that same year, had used it to publish a book about traditional plant knowledge. He continues working with members of the Enduring Voices Project team, including Anna Luisa Daigneault and Nathan Shelton to do recordings and document the language and cultural practices.

Rudolf is a speaker of the Panau language from Matugar village, Madang Province, Papua New Guinea. He has a dream of reviving and invigorating his language, now spoken by fewer than half of his people. At the Santa Fe workshop, he produced the first book in the language. Rudolf worked with the Enduring Voices team, including graduate student and Living Tongues Fellow Danielle Matthieu-Reeves in recording a Panau-English online talking dictionary, which will provide the first presence for this language in the internet.

“It looks like there are about less than 500 people who speak Panau. Young people don't speak Panau, we speak pidgin which is a common language in Papua New Guinea. Children under the age of 10 would never speak the language at all.” –Rudolf Raward

Bhubneshwar is a scholar and teacher of the Ho language, one of the larger Munda languages with a dispersed population of nearly 1 million. His research and participation in the Santa Fe workshop were funded by a grant from the Genographic Legacy Fund.

Grace is a linguist and native speaker of the Khasi language of Meghalaya State, India. Grace received her PhD in Linguistics from the Univ. of Delhi, and is currently an assistant professor at the University of Hyderabad in Hyderabad, India. She is familiar with ten dialects of her native language, Khasi. With funding from the Enduring Voices Project, she is working to preserve and document stories and cultural traditions of the Khasi people.

Send to a Friend