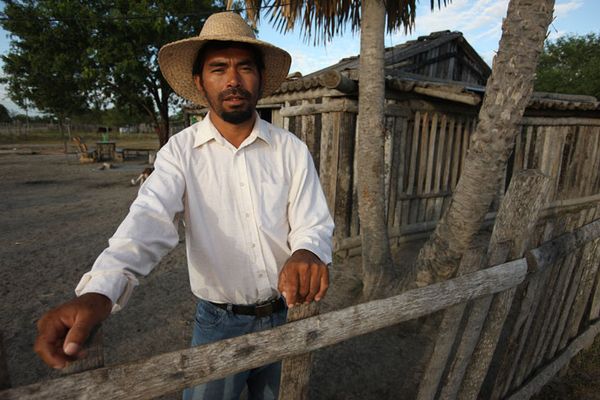 In May 2009, the Enduring Voices team traveled to Paraguay, which lies within the Central South America Language Hotspot and has a reported 18 languages (not counting Spanish) belonging to six distinct language families. The team included linguists Greg Anderson and David Harrison, photographer Chris Rainier, plus Anthropology graduate student Anna Luisa Daigneault and photographer/videographer Alejandro Chaskielberg. We were supported in logistics and mapping by our project manager Jeremy Fahringer, based at Swarthmore College. We focused on three small languages—Ishir, Toba-Qom, and Maka—which belong to three distinct families and are at different stages of language vitality or endangerment. Our recordings of these languages provide important insights into the current state of these cultures.

We chose Paraguay because it lies within the Central South America Language Hotspot. Paraguay shows extreme linguistic diversity, with a reported 18 languages (not counting Spanish) belonging to 6 distinct language families. Most Paraguayan languages have relatively low levels of scientific documentation. We focused on three small languages—Ishir, Toba-Qom, and Maka, belonging to three distinct families, and at different stages of language vitality or endangerment. All three languages are described in some published texts, dictionaries and scholarly papers dating back to the 1950s or earlier. No active linguistic community exists at the institutional level in Paraguay and thus only grassroots efforts are found, sometimes supported by NGOs or more commonly missionary organizations. Further, video and audio recordings are not known to exist for these or indeed for most small Paraguayan languages, a fact confirmed by people we met in local communities, museums and archival institutions in Paraguay. Thus, at a minimum, our new, annotated recordings of these languages (totaling more than 25 hours of recordings, plus hundreds of photographs) enhance the level of existing documentation, will provide resources for future study and revitalization, and will help raise public awareness of the languages. Our photographic and video documentation provide important insights into the current state of these cultures. In the case of the Ishir, the team photographed and filmed the striking renaissance of shamanic and ritual traditions following the recent departure of proselytizing missionary groups.

We are deploying state of the art mapping techniques, in collaboration with NGMaps, to more accurately map language hotspots and the local distribution of language communities. In Paraguay we collected geo-locational coordinates and current numbers of speakers, as well as photographs of the local environment and the elders. The attached map, which we produced and distributed, is thus more accurate than previously existing maps of Paraguay’s languages.

The team met with Paraguayan cultural stakeholders at all levels, including Minister of Culture, Dr. Ticio Escobar, who endorsed our project and assisted us. We met two tribal chiefs (Maka, Toba-Qom), numerous community leaders and elders (Ishir, Maka, Toba-Qom), indigenous educators, and traditional religious practitioners (Ishir). With each of these individuals, we explained our project goals and methods, we requested and obtained permission to work in the communities, we solicited active collaboration, and we offered copies of the relevant recordings, and photographs we had collected in their respective communities.

In two Ishir communities ( Karcha Balut and Puerto Diana , both located on the upper Paraguay River), we fulfilled specific community requests to produce and distribute copies of an existing first grade Ishir language textbook. We were allowed to observe a first grade class taught entirely in the Ishir language, a very hopeful sign of the level of linguistic pride and language maintenance in that small community (where total speakers number fewer than 1,500).

We identified an individual from the Ybytoso Ishir community in Karcha Bahlut— Andres Ozuna, a 29-year-old language activist who is compiling an Ishir dictionary—to receive the Language Technology Kit (laptop computer, still photography camera, video camera, audio recorder). We are providing him with technical training, and he will be invited to participate in our language revitalization workshop to be held in New Mexico in early 2010. Team member Anna Luisa Daigneault, supported by Enduring Voices project funding, has remained in Paraguay for one month after our expedition to make linguistic recordings among two other Chaco peoples, the Enxet Norte and Ayoreo, and to assist the Ishir communities in language revitalization projects.

Contact Dr. David Harrison with any questions or comments at harrison@swarthmore.edu .