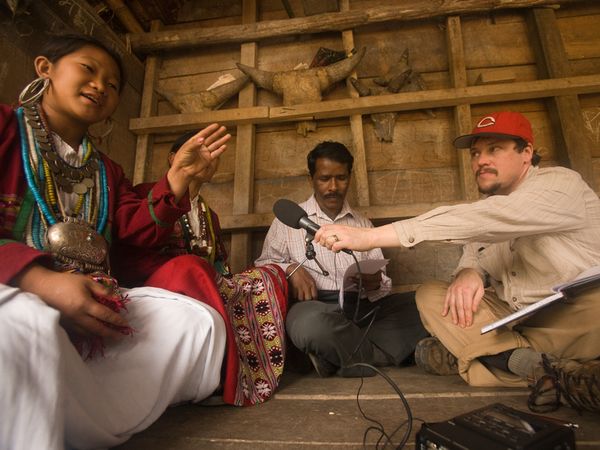 Greg Anderson and Ganesh Murmu interview a woman (name withheld) from the Aka tribal group.

A visit by an Enduring Voices team to India's Arunachal Pradesh state has yielded the first-known recordings of several rare and poorly understood languages. The group, which included a foremost Indian tribal scholar and member of the Santal tribe, focused its efforts on the languages and cultural traditions of the Aka and Apatani people. Stay tuned for a report from our November 2008 expedition to India.

The Enduring Voices team visited Arunachal Pradesh, the northeasternmost state in India in March 2008. We prioritized this region because it is a part of the Greater South Asia Language Hotspot. We visited two separate areas within this region, recording half a dozen languages, most of which lacked any available recordings and are extremely poorly known to science. In the first area, we were the first group of trained linguists that have ever visited. In the second, an Indian linguist had worked there in the 1980s, but no recordings of his work are available.

The Enduring Voices team consisted of Chris Rainier, Greg Anderson, David Harrison, and Ganesh Murmu, a linguist and member of an Indian indigenous tribal ethnic minority group, the Santals. Murmu is one of few tribal scholars in India to achieve such a high level of respect and expertise. He is the director of the Department of Tribal and Regional Languages at Ranchi University, a unique institution training a new generation of tribal scholars. Murmu’s team received the first of our series of language technology kits, and Ranchi University will continue to serve as our host institution in India for future expeditions.

In the first region, we concentrated on the Aka people. Aka is a culture undergoing rapid change and facing strong pressures to assimilate to majority (Hindi) culture. Most people still live from domesticated animals, raising livestock such as cattle and pigs, and trading these for rice and other goods. Many still practice traditional (animist) religion. But a significant portion of the population now spends time in the lowlands working or participating in formal schooling, and they have brought many new cultural habits back to Aka country. The pressures on Aka culture are evident in rapid intergenerational shifts in language use, education, traditional architecture, clothing, and religious beliefs.

The second part of the trip focused on the Apatani. The Apatani live in compact bamboo villages, practice rice and fish cultivation, and still have many traits of traditional life. One cultural practice that is being lost, however, is the elaborate system of facial tattooing and ornamental nose plugs worn by women. During our visit, we were able to witness a Donyi-Polo (sun and moon worship) religious ceremony.

The Enduring Voices linguistics team will spend the next few months processing this data.