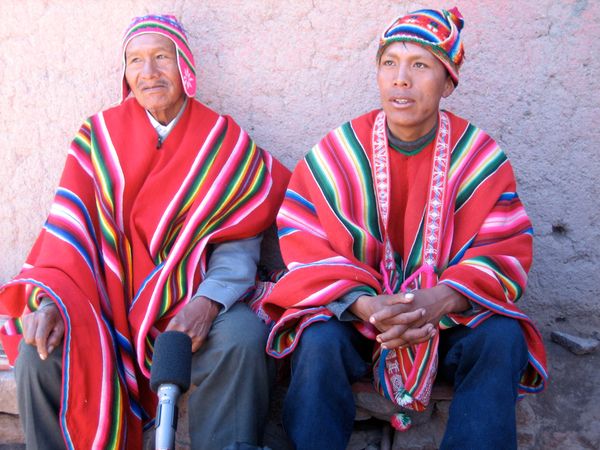 Bolivia's Kallawaya tribe cleverly anticipated the information age by half a millennium. This ancient culture of herbalist healers encoded their specialized knowledge of medicinal plants in a secret, mixed language to be transmitted only within practitioner families. K. David Harrison and Gregory Anderson, accompanied by two Bolivian scholars, presented Kallawaya materials we had recorded to the Bolivian Ministry of Culture, which had not previously had such recordings. We hope to help raise awareness of this language within Bolivia and more broadly, in order to motivate people to help safeguard this valuable knowledge base.

The Kallawaya, herbalist healers whom we visited in Bolivia in June 2007, cleverly anticipated the information age by half a millennium. They realized that although they could not restrict access to the specimens of (nor patent the knowledge about) the thousands of medicinal plants they had discovered, they could encode their specialized knowledge in a secret, mixed language to be transmitted only within practitioner families and between males (for example, grandfather to grandson).

Despite the 400-plus-year interlude since the fall of the Inca Empire and the widespread use of the Quechua language in the community, the Kallawaya have preserved their secret language, maintained their elite position as healers that attract a national and international clientele, and achieved the (moral but not legal) protection of being recognized by UNESCO as part of Bolivia's (and the world's) intangible cultural
heritage.

We are very interested in the problem of intellectual property vis-a-vis small languages and the knowledge they contain. Western legal regimes have neglected to provide any protection for ideas that are not individually attributable "eurekas," but rather bodies of collective knowledge worked out and passed down over millennia. The threat of bioprospecting, so thoroughly exposed by the late Darrell Posey in his work, is that companies will swoop in and (legally) steal traditional medicinal knowledge possessed by indigenous peoples, profiting handsomely while paying them no royalties whatsoever.

Kallawaya is an excellent example of a language that could be patented for both its form and content, for the economic well-being of the community that invented it, and for protection against predatory pharmaceutical corporations that seek to exploit that knowledge without recompense.

This research is in collaboration with Bolivian scholars Ricardo Lopez and Jose Lara Yapita and coordinated by the Living Tongues Institute for Endangered Languages. It will be featured in the forthcoming film The Linguists from Ironbound Films.
http://www.thelinguists.com/